Across the open space on Ithra’s escalator is a new work created by American artist Darel Carey for Ithra’s first contemporary exhibition upon reopening to the public since Covid-19 – ‘Seeing & Perceiving’.

Its impact is immediate and its effect engulfing. An intricate pattern of optical and spatial perception, titled Direction of Light (2021), covers the length of the entire escalator with lines of black masking tape. 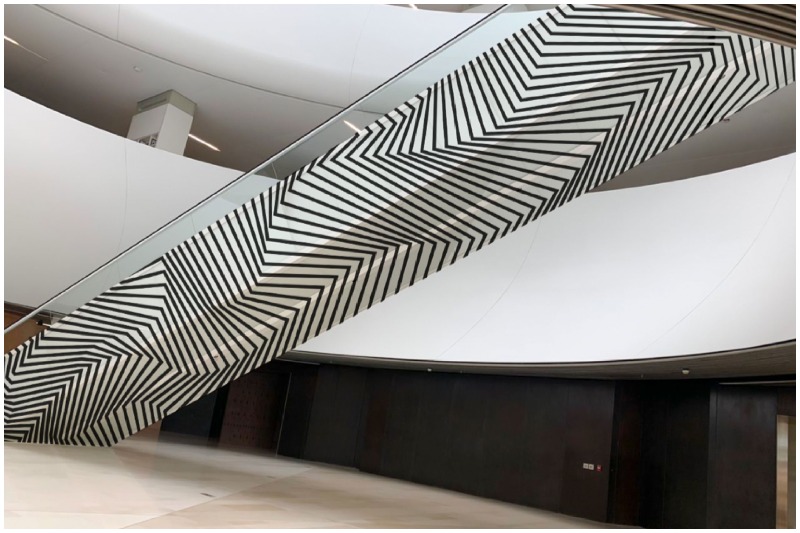 A line on its own is simple. When combined with many other lines in a consistent, precise manner, the lines become more than just the lines.

As a whole, they form something more complex than what they are individually. Carey’s art makes you look at a surface or space differently to contemplate your own perception and the environment around you.

And that is what ‘Seeing & Perceiving’ is all about. It features elements that invite us to explore and incite critical thinking about how we see and perceive the world.

While sight may be the sense we’re most familiar with relying on in a museum, the works of art in this newly launched exhibition compel us to rethink what it means to see art.

They offer a moment of contemplation or prompt a shift in perspective.

A collection of 26 artworks by 20 artists

We take a closer look at some of the more unusual sensory experiences you can expect in ‘Seeing & Perceiving’. 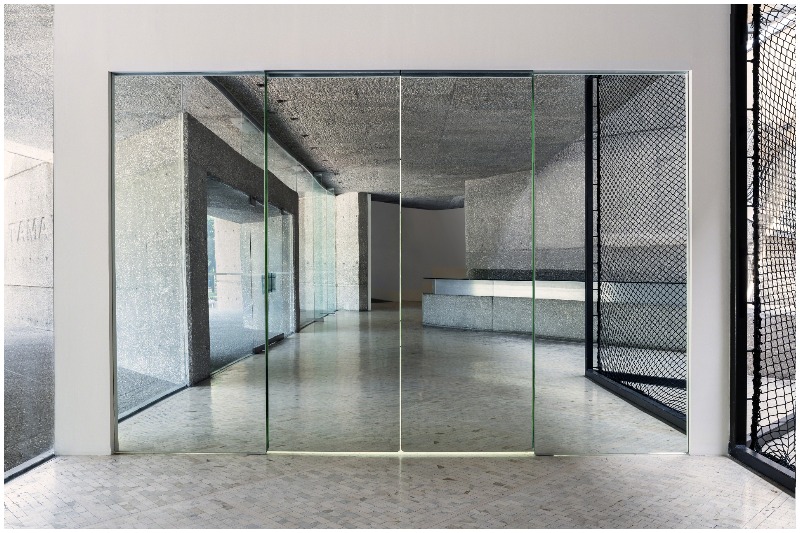 Your perceptions of space and depth are challenged by the visual loop of reflections in Carsten Höller’s Six Sliding Doors (2021). It features six automatic sliding doors with mirrored surfaces on both sides, through which you can walk in an apparently endless passage.

The doors are installed at evenly spaced intervals in a corridor-like space and are connected to motion sensors that cause them to slide open when you approach and close shut when you move away.

As a result, your movements alternately break and bind the visual limits of the space, which can be entered from either end of the corridor, increasing the likelihood of unexpected encounters as the doors open and close.

Imagine another person entering this door from behind at the very exact moment. You find yourself for a brief instant “in” the body of the other and momentarily perceives the other as yourself.

Six Sliding Doors (2021) manipulates your own emotional and physical states, making your behaviour its subject.

The work of Italian painter Esther Stocker mesmerises. In Future Thoughts (2021), she focuses on spatial abstraction and architecture, pulling you into a different dimension. 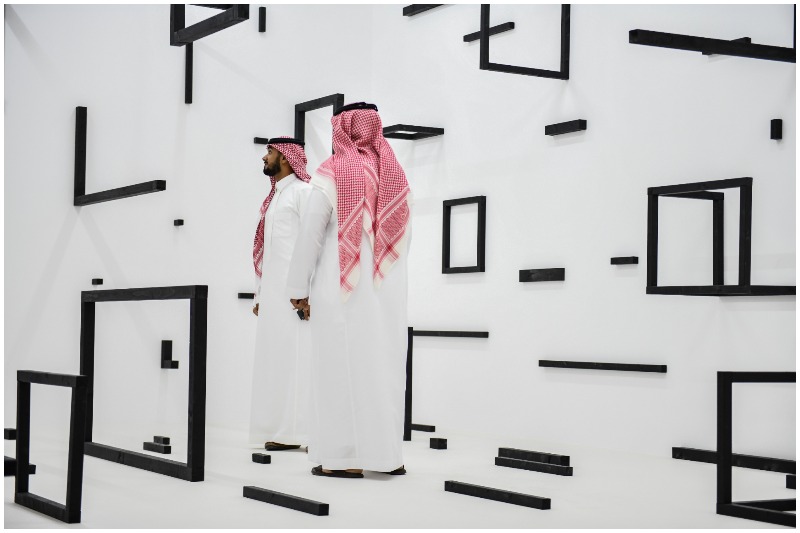 Black-and-white geometrical landscapes are created through the multiplication of simple shapes and forms, horizontal and vertical lines. You may become lost in these boundless spaces.

Screen by Do Ho Suh 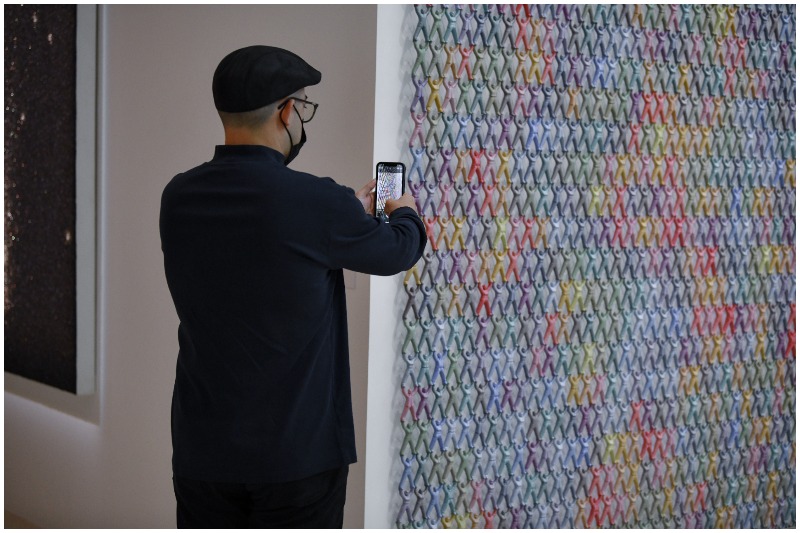 Screens, a type of free-standing furniture consisting of several frames or panels, are an essential design element in Korean homes. They are often used to divide spaces within rooms.

Here, the many small figures in Korean installation artist Do Ho Suh’s Screen (2005) are used to examine opacity and transparency, division and connection, privacy and togetherness.

Translated as ‘translucent chamber’, that is the name of the installation by Argentinian painter Jorge Macchi. Think of it as an inaccessible room, a brick wall decomposed into its parts that forces you to modify your usual route in space. 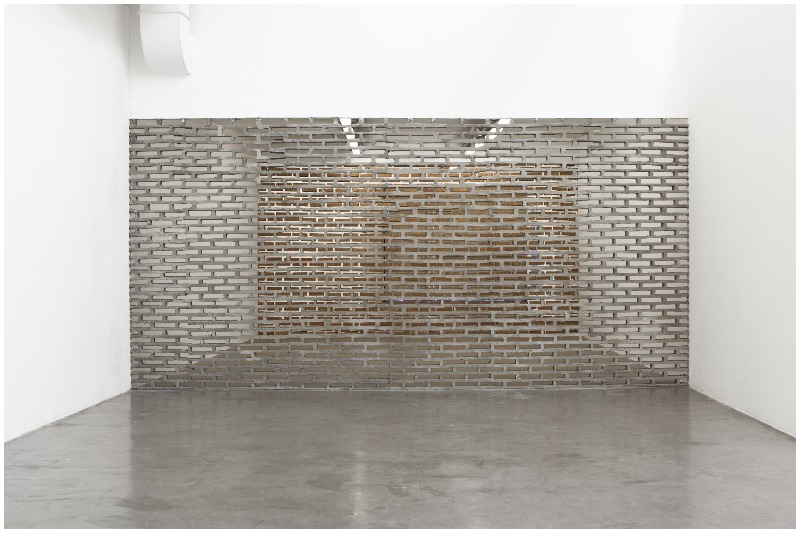 The work invites you to peek: through it, we see a huge painting spatially forbidden from the entrance to the room. It also invites revelation: it forces the installation to show usually private spaces to the public.

A pioneer of the Los Angeles-based Light and Space movement in the 1960s, celebrated American artist Robert Irwin presents South South West (2014-15). It is one of the works where Irwin shows his continuous experimentation with the perceptual capacities of fluorescent lighting.

A reaction of colour, shadow and spacing is shown by four stages of choreographed light, which makes you perceive the same artwork in different ways.

Light Upon Light by Walaa Fadul

Walaa Fadul’s piece Light Upon Light is the winning artwork for the Ithra Artist Open Call program, which aims to support a selection of local talents by investing in their development through mentorship and training.

A composition of six hologram fans and 3D holographic visuals, her work explores the concept of perception through light, colour, and void.

Think beyond what you see 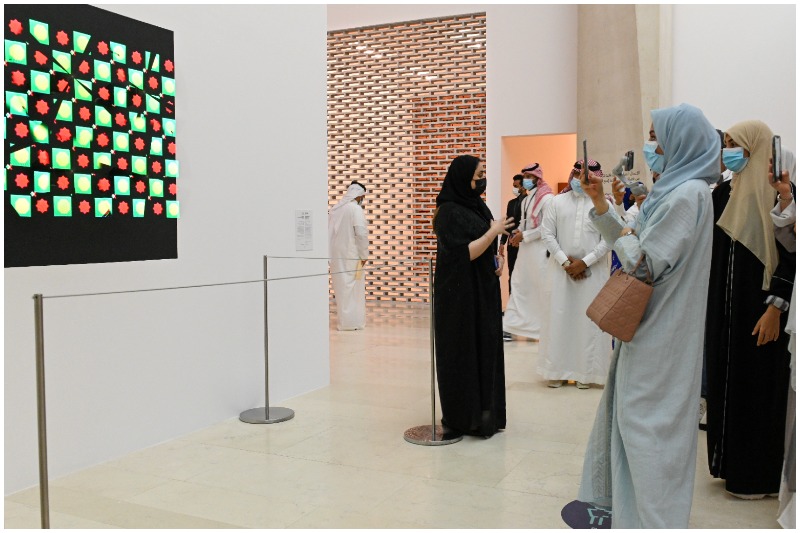 Studies have shown that the average person spends 17 seconds looking at a work of art in a museum. It usually takes much less time than that to identify an image.

But understanding it? That requires slowing down and taking the time to see the details. This kind of thoughtful, close-looking helps us to see that things are not always as they appear at first glance.

A quick guide to Al Khobar: What to do and where to stay
Sign up for the What’s On Newsletter

‘Seeing & Perceiving’ explores sight and perception, the cognitive act of seeing and the emotional elements of psychology on how perception is formed.

Its approach places great importance on our immediate sensory experience before the analytical brain sets in.

It is a stepping stone for introducing conceptual and contemporary art to the audience. At the same time, it is also an incentive to explore critical thinking by encouraging the public to reflect on your ways of thinking and perceiving art and questioning your environment – by observing and analysing the reality of the material, form, colour, or shape.

Art
Culture
EDITOR’S PICKS
New eVisa scheme for tourists arriving into Saudi Arabia
READ MORE
AlUla Wellness Festival is returning: here's all you need to know
READ MORE
10 of the best mocktails in Riyadh you need to try right now
READ MORE
The most romantic restaurants in Jeddah
READ MORE
MOST POPULAR
6 fantastic things to do in Jeddah this weekend: November 24 to 26
10 wonderful things to do in Riyadh this weekend: November 24 to 26
Saudi Arabia's first-ever JW Marriott hotel opens in Riyadh
Anghami Lab: A new rooftop entertainment venue opens in Boulevard Riyadh City
Public holiday declared in Saudi Arabia after World Cup win
YOU SHOULD CHECK OUT