Organised by the Saudi Ministry of Culture, the festival is held from September 13 to 27 in Rijal Almaa, an ancient village in the Asir region…

These Qahtani men – a colourful tribe with deep roots – traditionally crown their heads with intricate arrangements of herbs, flowers, and grasses and live on the foothills of the Asir mountains in southwestern Saudi Arabia. 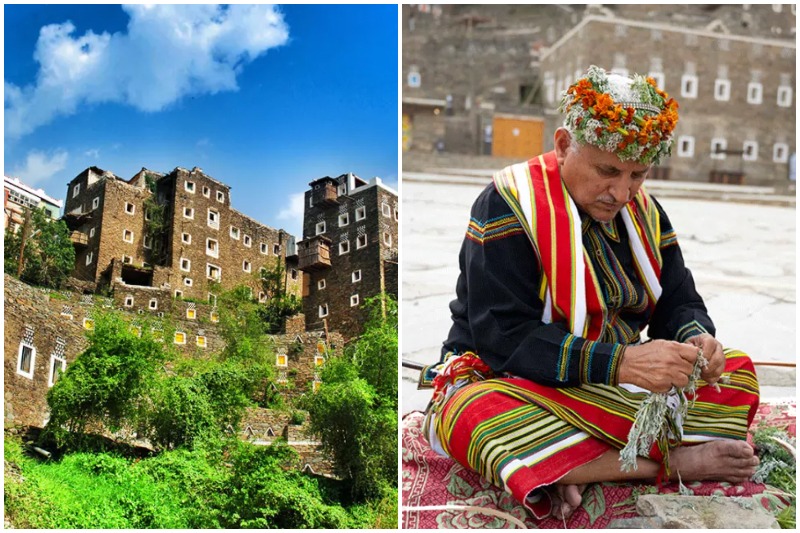 The colourful headpieces are worn for their aesthetics and what the tribe believes is their health-giving properties.

And now, their traditions are being shared with the world.

From September 13 to 27, the Ministry of Culture is organising the Flowerman Festival, an immersive event that includes various activities celebrating an ancient Saudi tradition from the southern Asir region.

The second edition of the Flowerman Festival 2021

This year’s festival celebrates the Asir region’s culture, customs, and traditions, with the theme “Nine Centuries of Glory”.

There will be various activities taking place at two locations: the village of Rijal Almaa and Al-Soudah Park.

The celebration features three main aspects of the flower men culture. The first being “Flower Men and Determination”, which will focus on the qualities of Rijal Almaa, reflected in many symbols, names, pieces of art, and stories.

The second event, titled “Women of Almaa,” highlights the status of the brilliant women who have contributed through art and distinguished initiatives in preserving the region’s heritage.

3 cool destinations in Saudi Arabia for when you just can't take the heat
Coming soon: The return of Riyadh Season and what we know so far…

The third is “Rijal’s Fort,” which highlights the design and architecture of Rijal Almaa.

In addition, the festival will provide visitors with an immersive and interactive experience of the history of the flower men through an open-air museum and live folklore performances at the main theatre.

Culture
Events
News
EDITOR’S PICKS
10 things to look forward to in Saudi Arabia this January
READ MORE
8 incredible hotels opening in Saudi Arabia in 2023
READ MORE
Epic Andy Warhol exhibition coming to AlUla Arts Festival 2023
READ MORE
5 fun and completely free things to do in Riyadh
READ MORE
MOST POPULAR
Tabuk is getting a mega new entertainment destination
A complete guide to Boulevard World Riyadh
10 wonderful things to do in Riyadh this weekend: January 26 to 28
Andrea Bocelli returns to AlUla: Here's how to watch
What to expect as the Diriyah E-Prix races into town this weekend
YOU SHOULD CHECK OUT