The Many Saints of Newark opens in KSA cinemas today, Thursday October 7 and it comes with a hugely emotional entourage. ‘Saints’ serves as a prequel to — and carries the delicate legacy of — the critically-acclaimed, much loved, cult HBO series ‘The Sopranos’.

New Line Cinema acquired the rights to create this, what is essentially an antihero origin story for the series’ core character Tony Soprano in 2018, with show creator David Chase crafting the screenplay, and veteran show helmsman, Alan Taylor attached to direct.

This film follows a tumultuous turn of events that help transform an impressionable young Tony, into the mob boss he is destined to become. The late great James Gandolfini, the actor that played the original head of the Soprano crime family, tragically passed away back in 2013, meaning the actor picked to play his younger self would receive no official ‘Mafioso kiss’ of approval. 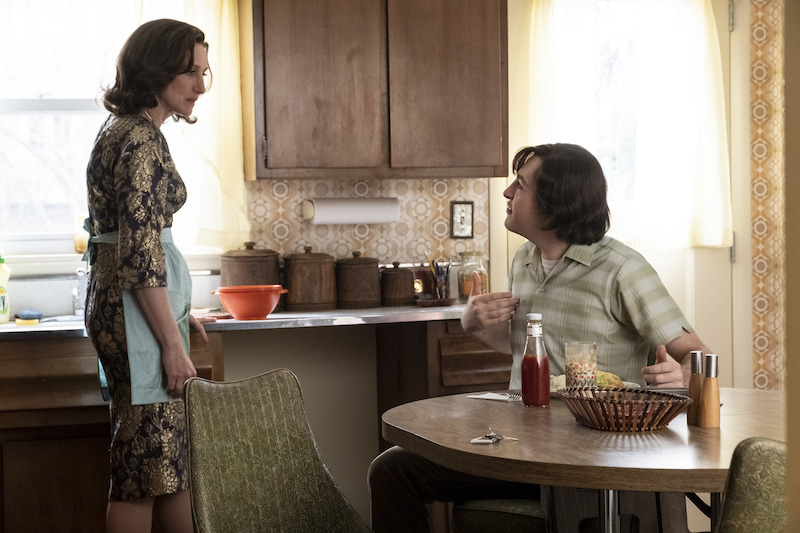 In a familial twist of kismet, and what feels manifestly appropriate for a David Chase project, Michael Gandolfini, James’ son, was cast to play the younger version of his father’s iconic character. And from the trailer, it looks like the cannoli hasn’t fallen far from the cannoli tree. The resemblance is undeniable, the subtle mannerisms, the brooding intensity, oh and the eyes Chico… They never lie.

What’s On: When did you first hear that there might really be a film coming out about “The Sopranos” and did you ever think you’d have a part in it?

Michael Gandolfini: Someone reminded me of this. I was actually in an acting class when I found out that they were going to do a movie. And I remember that I was about to do a scene. Actually, literally prepping, about to walk onto the stage, when I found out. My mom texted me. You know at first, I had not watched the show. I’d been in touch with David Chase and, of course, some of the cast members, but not that much. I was going to NYU. So, it wasn’t a huge part of my life, believe it or not. So, it was sort of like, “Cool. I can’t wait to watch it. I can’t wait to know about it. And I’m rooting for everyone.” But yeah, it didn’t even cross my mind that there might’ve been this opportunity.

WO: I love that, actually. I love that you weren’t obsessed with the show. You were very young. You should not have been watching that show!

MG: Yeah. I didn’t (LAUGHS). I heard that it was going to be a young Tony. So I thought that it would be too young for me. But, I was more focused on my thing and I didn’t even know that an opportunity would be available.

WO: Yeah. New York University keeps you busy. So then, how did it feel to step into not just the shoes of a very iconic character, but obviously, a role that your dad made so beloved and famous? How did that feel for you?

MG: There were a bunch of layers. It was my first movie. It was an iconic character. It was my dad’s character. And on top of that, I was going to work with a bunch of my heroes. When I say it like that, it’s so overwhelming. Right? I feel like I’ve finally actually learned that I did this. I somehow didn’t even know I consciously did it… I think that I created these little goals that were attainable, like, “Okay. Get the accent. All right. I feel good about my accent…” Then, on day one, “Be a good partner for Alessandro Nivola [playing Dickie Moltisanti].” Alessandro and Jon Bernthal. “How can you be a great partner for them? What can you give them? What do they need?” For me, it was being the best young actor, learning as much as possible, and being able to just take in these incredible performers. And because I think I did that, I didn’t think about the massiveness of everything. I really didn’t think about it that much.

WO: You’re an actor doing a job at the end of the day. Start and end of every day, you’re there to do a job. 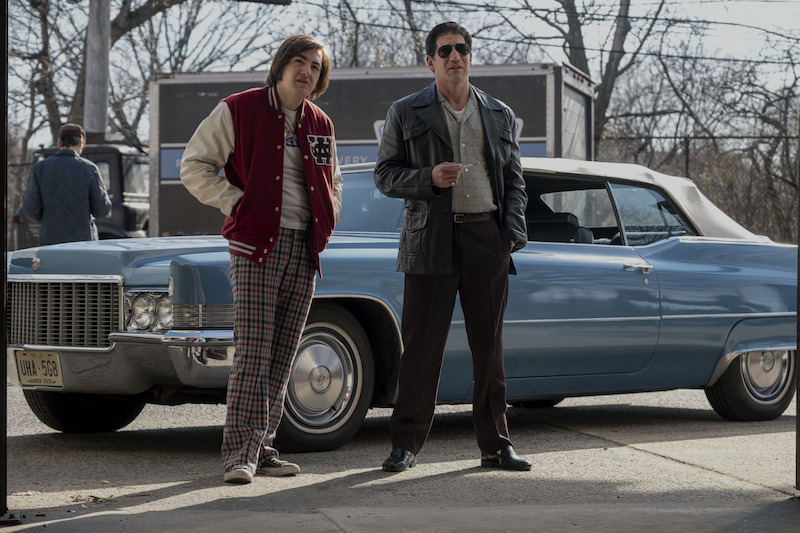 WO: Tell me about working with Alessandro, Jon, Vera, Corey… I mean, come on.

MG: Exactly. Right? I mean, I’m the luckiest young actor out there. Alessandro and I got very close very quickly. We started talking every day. We started reading the same books, meeting the same people, doing the same research. We just really clicked. I’d see him every weekend and just spent so much time together. And I knew I could trust him and just really lean on him. He’s just so talented. He just gave me so much reinforcement and taught me so much. And then Bernthal, me and Bernthal… I love that guy. We started boxing together, preparing a bit, going to see plays. And he’s become a dear, dear friend. Vera, another one, just an incredible performer and actor. We started hanging out. I got to spend time with her family, eat some meals. And then Corey, I also spent time with him… it’s so cheesy, but we really did become a family. I can’t think of a weekend that we weren’t all together. Gabriella [Piazza, who plays Joanne Moltisanti], me and Alexandra [Intrator, who plays teenage Janice Soprano]… she literally is like my sister. Tony and Janice, it just felt so right the second I met her. It’s just such a gift.

WO: That’s wonderful. I would imagine also that it helped, obviously, especially with Alessandro, because this is really a story about his character’s influence on the man that Tony starts to become. Surprisingly, not Tony’s dad, but Tony’s uncle. Can you talk a little bit about that onscreen relationship?

MG: Yeah. It’s a very subtle, but very effective thing that David did. Johnny’s absence is felt really strongly, and Tony really doesn’t have anyone except Dickie. He equally thinks Dickie is so cool, so inspiring, and he leans on him for everything. Like with Alessandro, I was able to lean on him. I felt like a lot of our onscreen relationship is really, really the way I see Alessandro in my life, except for cool. I don’t think he’s cool. But…(LAUGHS) I’m joking, but that manifested in Tony and Dickie’s relationship. And I think that Dickie’s kindness, leadership and mentoring qualities really are so important for Tony. One thing that I thought about, too—I was so focused on Livia and Tony in the series, because they’re so big. But, when I started working on scenes in the film, I quickly realized that I, Michael, I was focused on making my parents proud—with my dad’s absence, I wanted to make him proud. So that manifested in Tony really focusing on Dickie and Johnny; it felt like a really important thing to make the men in his life proud of Tony. Every scene, in some way, shape, or form, manifested itself in that. 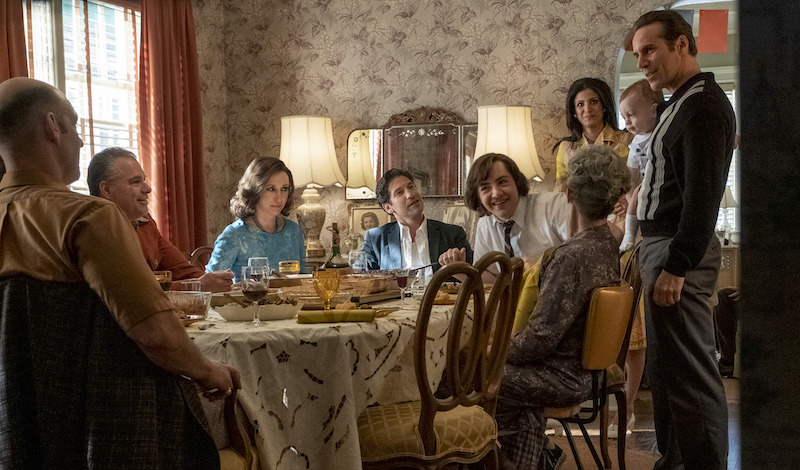 WO: I think it’s very relatable for kids, especially at that age. There are obvious mentors in this film, David Chase and Alan Taylor. You had to have had a great time working with the two of them.

MG: It was amazing, I mean, working with David and Allen are such gifts. I think that David, he’s so brilliant. And one of the things that I’m so inspired by is his ability to ask questions. He’s so curious about lights, people, art and filmmaking, and working with him and getting the David Chase thumbs up, like “Okay, good!” And then, Allen has really crafted such a big world. I mean, so many characters, scenes, places, backgrounds, character clearings… but he really brought it down to the emotional arc of Dickie and his moral code. He did such an incredible job, and it takes masterful directing to really be able to do that.

WO: Does it help when you step into these amazing sets from late ‘60s? The costumes, the hair. How did that feel? Because that’s so long ago and so long before you were even born.

MG: It felt amazing. Tony’s kind of nerdy, and I love it. But God, I wore some floral shirts. Every day, my bell bottoms got bigger. Amy Westcott is an incredible costume designer. I said to her, “Every day, my bell bottoms get wider. Every day.” Absolutely. You watch the show. It’s super addicting. You know what I mean? My girlfriend watched the show and a week later, she’s talking in an accent. It’s just such an addicting aura of the accents, everything. So, it was easy to become immersed, because it’s so fun. Every crew member, they talk in the accent. Everyone’s just completely into it. It was just so fun. And David has a real ability to get an amazing cast and an amazing crew, who are all good people. They’re good people who care about the work and bond so well. It was a joy to go to set every day.

WO: What do you think it is about this kind of movie, this genre of film, that still captivates? It’s been done beautifully for so many decades, and people still flock to these mafia films. Why do you think that is?

MG: I think it’s a couple of things. Like any genre film, a Western, it’s this fantastic account of a world that exists, that is so interesting, but we’re all so far away from. I also think it’s because the mob stands for camaraderie, family and integrity—even though it’s all hypocrisy—but that’s what it stands for. You take a blood oath, and then you’re a part of this family. And I think everyone’s kind of searching for that. I think people see that in movies and they like it. They like the camaraderie. They like the love. They like the family element, and they like the fantasy element of these lawless men. But also in regard to this movie, David’s really covered this 1940s noir element of a man who has a moral code, a code that he’s perhaps going to violate. Lose the code. I think the movie’s about the human experience, and that’s what David does so well, the human experience. You feel seen, you feel heard, you feel loved; you can relate or not relate; you can learn about some people. And I think that’s what draws people, and me, to the show and to this movie.

The Many Saints of Newark is out in cinemas across the KSA now. Book your tickets here.

Culture
Film
EDITOR’S PICKS
10 things to look forward to in Saudi Arabia this January
READ MORE
8 incredible hotels opening in Saudi Arabia in 2023
READ MORE
Epic Andy Warhol exhibition coming to AlUla Arts Festival 2023
READ MORE
5 fun and completely free things to do in Riyadh
READ MORE
MOST POPULAR
Jake Paul vs Tommy Fury is set for February 26 in Riyadh
Tabuk is getting a mega new entertainment destination
A complete guide to Boulevard World Riyadh
10 wonderful things to do in Riyadh this weekend: January 26 to 28
Andrea Bocelli returns to AlUla: Here's how to watch
YOU SHOULD CHECK OUT