Swanky hotels, big name restaurants and an array of festivals worth travelling for…

The very landscape of Saudi Arabia is changing, and with Vision 2030 being brought to life more and more each year, Saudi Arabia’s tourism scene just keeps getting better. From big name hotel brands to renowned restaurants and homegrown festivals already shaking up the international stage, we invite you to discover the very best of Saudi Arabia in 2022, with our guide to the best happenings.

From boutique hotels in Riyadh to a new dining destination packed with must try dishes, here’s 22 things to look forward to in Saudi Arabia in 2022. 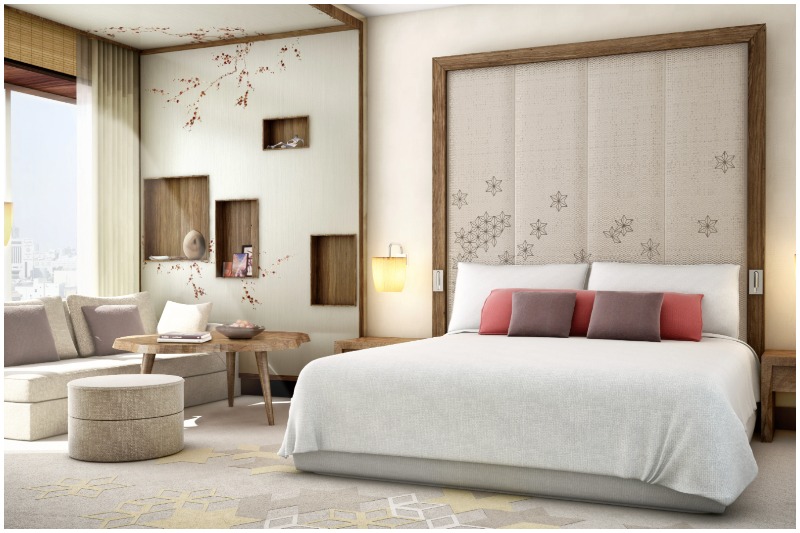 Riyadh’s first five-star boutique hotel, the long-awaited Nobu Riyadh will welcome guests in 2022. While the restaurant has been serving an array of chef Nobu Mahutisha’s upscale Japanese cuisine since late 2019, the stylish 119-room hotel is one of Saudi Arabia’s most exciting hotel openings next year. Among the ultra-luxe facilities at this modern hospitality masterpiece, expect a stunning spa, a full-service fitness facility, an exclusive executive club lounge and two glittering ballrooms.
nobuhotels.com

Marriott’s hotel portfolio in the Kingdom is set to get a serious upgrade in 2022, with the arrival of an array of the brand’s big luxury names across the country. Among them, Jeddah will welcome Edition Hotels, with a 63-room property set within the new Jeddah Yacht Club & Marina, located on the edge of the Jeddah Corniche Circuit. As is customary with all of Ian Schrager’s Edition properties, The Jeddah Edition will embody the spirit and heritage of Jeddah, reflecting the locale through curated restaurants, wellness and design.
editionhotels.com

In Riyadh’s central business district, The St. Regis Riyadh will debut in 2022 as part of ‘Via Riyadh’, a luxury, mixed use development with retail and entertainment outlets. The 83-room hotel will include an impressive collection of 23 suites, two signature restaurants, an outdoor pool, fitness centre and spa. Expect the brand’s signature hallmarks and traditions, including its bespoke butler service and avant-garde style.
stregis.marriott.com

The ultra-Instagrammable AlUla landscape has already undergone a huge tourism redevelopment in 2021, including welcoming a new Habitas resort. In 2022, the hotel development continues with the introduction of Banyan Tree AlUla, which will rebrand and extend the current Ashar Resort, close to the UNESCO-listed site of Hegra. Inspired by more than 200,000 years of human heritage, the resort features a collection of one-, two-, and three-bedroom pool villas, each blending an elegant look and feel with the natural elements.
banyantree.com

The first 14 – of 38 – hotels within the Diriyah development were announced in December 2021, and include some of the biggest names in the business. While the openings from the likes of Rosewood, Six Senses, LXR Hotels & Resorts, Raffles and Park Hyatt extend up until 2026, the first of them, a Luxury Collection property, will begin to welcome guests from next year. While little is known about the opening, it’s expected to have a collection of 141 rooms and suites.

Positioned at the helm of the North Corniche, Shangri-La Jeddah is an upcoming luxury landmark at the forefront of new Jeddah. A collection of 203 stylish rooms and suites plus 17 luxury serviced apartments are fitted with floor-to-ceiling windows that flood the spaces with natural light, complimented by contemporary interiors that reflect the sandy beaches and endless ocean views.  A dedicated Kids Club and supervised play area provides the canvas for families to create unforgettable memories, while four innovative dining concepts promise to satisfy all tastes.
Shangri-la.com/Jeddah

JW Marriott Hotel Riyadh is planned for the first quarter of 2022. Situated on King Fahad Road, this peaceful oasis amidst the bustle of the city is just a five-minute drive from King Abdullah Financial District. The 349-key hotel, spanning 66 floors, will stand as one of the tallest buildings in the city. Alongside guestrooms, an array of impressive dining outlets will include a JW Steakhouse, along with exceptional facilities spanning business, wellness and more.
marriott.com 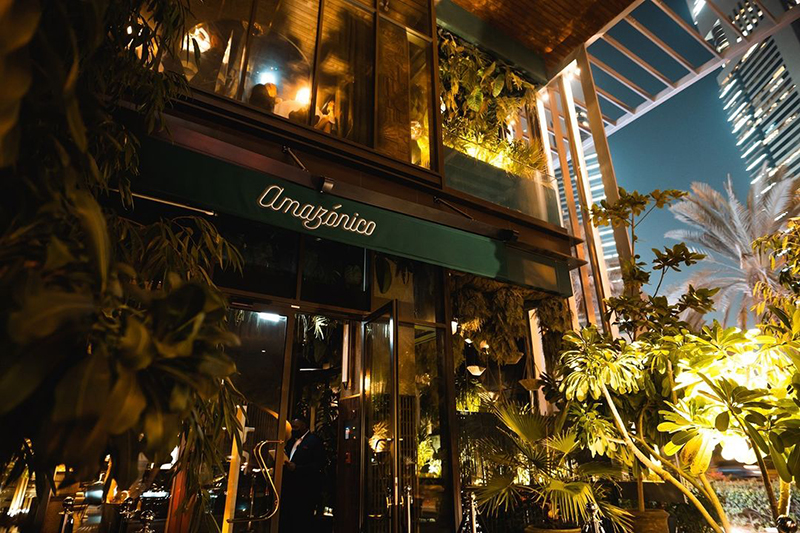 Latin American-inspired Amazonico will add Riyadh to its growing list of locations around the world. Founded in Madrid and now with locations in London and Dubai, the ultra photo-friendly restaurant with its jungle-themed interiors has already hosted a pop-up as part of Riyadh Oasis 2020/21, but is expected to launch a permanent location in 2022.
@amazonicoriyadh

Following on from the arrival of sister restaurant Roka in 2021, Zuma will open a permanent restaurant in Riyadh in 2022. Joining Rainer Becker’s Zuma empire of 17 restaurants around the globe, Zuma Riyadh’s as of yet undisclosed location will serve up signature dishes such as marinated black cod, sliced yellowtail and robata skewers.
zumarestaurant.com

Already a firm favourite on Dubai’s fine dining circuit, Gaia’s global expansion plans include restaurants in Doha, London and Riyadh in 2022. The upscale Greek restaurant with its pretty interiors, coastal Aegean vibes and delicious menu masterminded by chef Izu Ani is still yet to announce exactly where in the Saudi capital it will open, so stay tuned.
gaia-restaurants.com

Rikas Hospitality – the group behind La Cantine, Lana Lusa, Twiggy, Mimi Kakushi and several other award-winning restaurants in Dubai – will bring six of their acclaimed dining experiences to Saudi Arabia in 2022. Among them, their signature restaurant La Cantine du Faubourg, described as a Parisian rendezvous of art, music and food, and the embodiment of the chic French lifestyle, which has been entertaining diners in Dubai since 2015.
lacantine.ae

Another Rikas Hospitality concept making its way from Dubai to Saudi Arabia is Mimi Kakushi, an upscale Japanese restaurant that made an instant impact on the Dubai dining scene when it opened earlier this year in the Four Seasons Restaurant Village. Transporting guests to the glamorous world of 1920s Osaka, Mimi Kakushi’s glamorous interiors offer an east-meets-west aesthetic, with bold artwork and cosy corners.
mimikakushi.ae

Bujairi Terrace is a name culinary connoisseurs in Saudi Arabia will soon be familiar with – the dining hub that forms part of the Diriyah masterplan will see a collection of 18 restaurants open early in 2022. Among the fine-dining names to know about at the stunning 15,000 square-metre project in the historic city is Hakkasan, the modern Chinese restaurant that already has 3 Middle East locations: in Dubai, Abu Dhabi and Doha.
hakkasan.com

First established in Madrid but with locations now in Ibiza and Beverly Hills, Tatel is the brainchild of Tennis ace Rafael Nadal and a duo of co-founders, and is self-described as embodying the “welcoming and playful spirit that characterises Spanish restaurants, with a carefully selected gastronomic offer based on traditional products and recipes. One of a number of upscale restaurants debuting early next year at Diriyah’s Bujairi Terrace, a glance at Tatel Madrid’s menu showcases an array of starters such as Tatel’s truffle Spanish omelette, grilled octopus and prawn and jalapeno ceviche, plus mains like red tuna loin and dry-aged steak.
tatelrestaurants.com

Combining elegance and sophistication with a playful personality, evident by way of bronze meerkats and monkeys throughout, Flamingo Room by tashas is a testament to Africa’s refined side. Founded by restauranteur Natasha Sideris, the Dubai restaurant is one of the most glamorous restaurants in the city – found at the lagoon side in Jumeirah Al Naseem. In Saudi Arabia, the same chic interiors can be expected at the Bujairi Terrace restaurant.
flamingoroombytashas.com 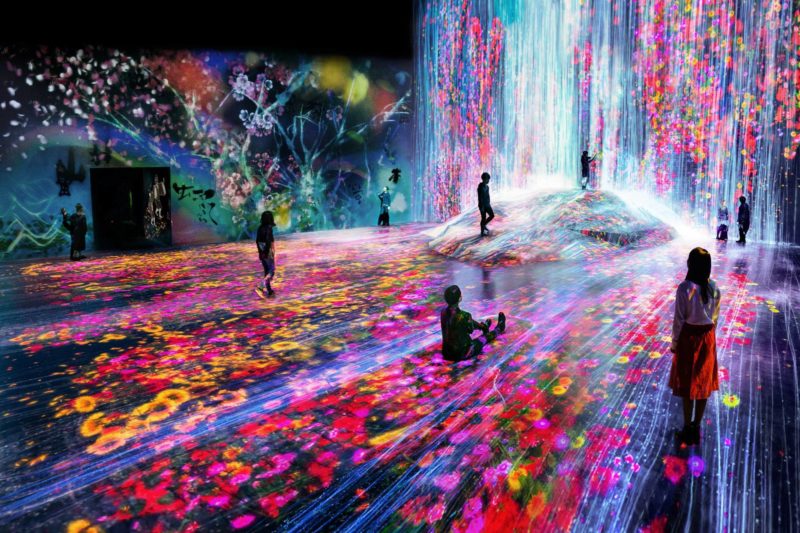 Initially announced to open in 2023, a new statement from Saudi Arabia’s Museums Commission has indicated that the new digital art space in Jeddah will welcome visitors from 2022. The immersive digital art space, in partnership with the Japanese teamLab artists team. The original in Tokyo is a popular museum known for its colourful futuristic digital art installations and endless photo ops, and culture seekers in Jeddah can hope for the same when teamLab Borderless Jeddah opens next year.
teamlab.art

Set to open in late spring, Cyan water park in Jeddah is set to join the ranks of world class water parks like Disney, Universal, Six Flags and Siam Park when it opens in 2022. While further details remain under wraps for now, the water park will feature more than 20 ProSlide Water Ride concepts, with something for thrill-seekers of all ages. 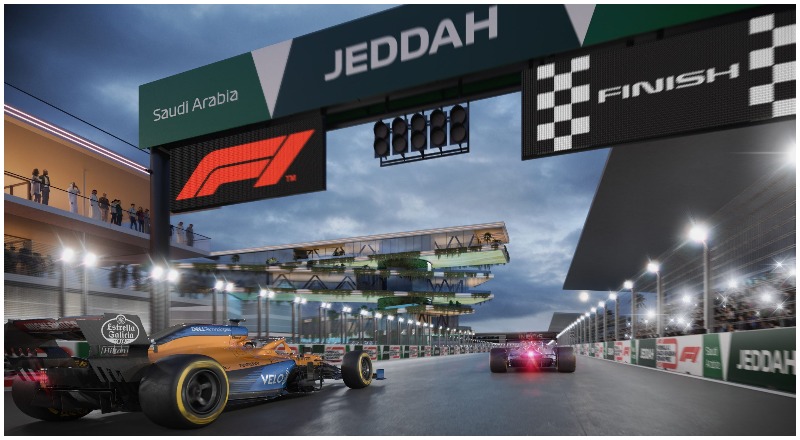 The first Saudi Design Festival presented by the Architecture and Design Commission will transform Riyadh into a hub for creative dialogue at the city’s JAX District. Across three weeks, SDF will bring together local talent in the region to celebrate great design, connect, reimagine the future and cement Saudi’s presence on the global design map.
saudidesignfestival.com

Now recognised as the world’s most valuable horse race, the third edition of the Saudi Cup will take place over a two-day event on February 25 and 26. The first ever Saudi Cup meeting in 2020 featured 22 Group or Grade 1 winners, who had accumulated 34 wins at that level between them, and a similar calibre is expected at the 2022 edition. Running as a Group 1 event for the first time in 2022, as well as five Group 3 races on the undercard. The event is held at King Abdulaziz Racetrack in Riyadh, with tickets on sale soon.
thesaudicup.com.sa

Riyadh Season takes over the entire city for a five-month festival that aims to bring the world to the Saudi Capital. Among the 14 zones, returning for the 2021/22 season is Riyadh Oasis, a pop-up leisure and dining destination set on the outskirts of the city. Running until the end of February, Riyadh Oasis features restaurant pop-ups from Novikov, Antika and Opa, as well as bowling, archery, golf, horse riding.
@oasiszonesa

It’s no secret that the fascinating AlUla landscape – with its jaw-dropping volcanic plains and ancient heritage sites – are best seen from the air, and as part of a multi-month AlUla Moments festival, the beautiful AlUla will host AlUla Skies festival for two weeks from February 27. Among the highlights, visitors will be able to enjoy a birds eye view of Hegra from a hot air balloon, see the sights from a vintage plane, or admire the rock formations of the Madakheel canyons on a helicopter ride. Other immersive experiences include a stargazing tour; and Symphony under the Stars, a spine-tingling musical performance set under a million twinkling stars.
experiencealula.com/alulamoments

After the inaugural Saudi Arabian Grand Prix in 2021, the Jeddah race joins the permanent F1 calendar in 2022. The second of 23 races (Bahrain is first), the Jeddah Grand Prix will take place over four days from March 24, leading up to the big race on Sunday March 27. Visitors can expect to witness exciting street racing under lights by the beach in the historic city of Jeddah, and enjoy an array of off-track action too, with an array of soon-to-be-announced after race concerts headlined by international acts.
formula1.com

Eat & Drink
Staycations
EDITOR’S PICKS
10 things to look forward to in Saudi Arabia this January
READ MORE
8 incredible hotels opening in Saudi Arabia in 2023
READ MORE
Epic Andy Warhol exhibition coming to AlUla Arts Festival 2023
READ MORE
5 fun and completely free things to do in Riyadh
READ MORE
MOST POPULAR
Jake Paul vs Tommy Fury is set for February 26 in Riyadh
Tabuk is getting a mega new entertainment destination
A complete guide to Boulevard World Riyadh
10 wonderful things to do in Riyadh this weekend: January 26 to 28
Andrea Bocelli returns to AlUla: Here's how to watch
YOU SHOULD CHECK OUT