These wonders are recognised for their natural and cultural significance…

Every Unesco World Heritage site has a tale to tell.

From historic Jeddah to rock art Hima, we celebrate the six wonders of Saudi Arabia, all of which are remarkable examples that underscore the Kingdom’s importance in the region’s ancient and modern history.

There’s much more to Saudi Arabia than vast ochre deserts. A desert oasis of shady palm groves and crystal-clear springs, Al-Ahsa Oasis stands as a dazzling haven against the harsh and untamed plains of the Rub’ Al Khali (Empty Quarter).

Sandwiched between Riyadh and Dammam, Al-Ahsa Oasis is home to more than 2.5 million date palms and is listed in the Guinness Book of World Records as the largest self-contained oasis in the world.

As rainfall is scarce, the area is highly verdant, thanks to a huge natural underground aquifer that turns the land into fertile soil. This results in the oasis producing at least five tonnes of dates every day.

There are also more than 60 natural springs, a huge lake, historic buildings, and ancient archaeological sites where history buffs can trace details all the way back to the Neolithic period.

When you’re there, don’t miss a chance to sample a khalasah date – the locals proudly proclaim it’s one of the world’s best.

At-Turaif District in Ad-Diriyah, the birthplace of the Saudi nation

Just 15 minutes from downtown Riyadh, At-Turaif District in Diriyah is the cradle of the first Saudi dynasty and a World Heritage site with over three hundred years of history.

Picturesque and historical, this first Saudi state is looped by Wadi Hanifah and has more than its fair share of great architecture sprinkled within it.

At-Turaif was founded in the 15th century, with much influence owed to the Najdi architectural style of Arabia. It is the original seat of power of Saudi Arabia’s Al Saud family and contains ruins of mud-brick houses connected by narrow alleyways.

Unfortunately, the site is temporarily closed, and the area has since been the subject of a thorough restoration plan aimed at bringing its historical legacy back to life.

Once complete, the redevelopment of the area will enable people to walk through the ruins, as well as the myriad museums and other spaces found inside.

Historic Jeddah, the gate to Mecca

To wander Jeddah is to retrace the steps of traders and pilgrims, who for centuries thronged the streets of this thriving city.

As the commercial heart of the Kingdom, Jeddah’s inimitable blend of old and new makes it among the Kingdom’s most magical places to explore – and the best way to see the sights, of course, is on foot.

Wander the labyrinthine streets and twisted cul-de-sacs of the old town of Al-Balad to discover traditional architectural styles peppered with influences from all over the world. It is known for its imposing tower houses, showcasing large wooden window enclosures and intricate stonework.

Oh, and be sure to drop by Naseef House – it’s worth a visit.

Did you know that Mada’in Saleh, also called “Al-Hijr” or “Hegra”, was the first site in Saudi Arabia listed by Unesco as a World Heritage site for its historical significance?

Hegra is essentially an open-air museum. Here, you’ll explore over 110 remarkably well-preserved tombs carved by Nabatean tribes, dating back to the first century BC, while learning about the ancient people and culture of AlUla.

Roman influence is also present in the form of defensive walls, gates and towers that once encircled the city.

Visit experiencealula.com to book your tour to the ancient city of Hegra.

Rock art in the Ha’il region 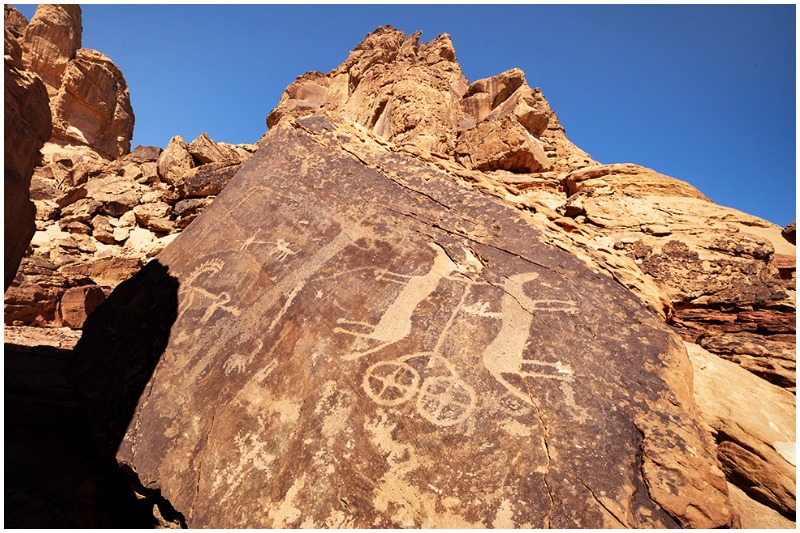 The rock art site in the Ha’il region comprises two components situated in a desert landscape: Jabal Umm Sinman at Jubbah, and the Jabal Al-Manjor and Jabal Raat at Shuwaymis, about 250 kilometres south of Ha’il and near the town of Al Ha’it.

Venture just over an hour northwest of Ha’il to Jubbah, and you’ll find yourself surrounded by pictures of the past. Jabal Umm Sinman in Jubbah boasts rock inscriptions dating back at least 7,000 to 9,000 years to the Pottery Neolithic period.

Jabal Al-Manjor and Jabal Raat form the rocky escarpment of a wadi now covered in sand. They show numerous representations of human and animal figures covering 10,000 years of history.

The ancient rock inscriptions at Hima in southwest Saudi Arabia is the latest location in the Kingdom to be included on Unesco’s World Heritage list.

In the western region of Najran, Hima was a hub for caravans on trade and Hajj routes between the southern parts of Arabia and Mesopotamia, the Levant and Egypt.

Travellers left behind a substantial collection of rock art depicting hunting, wildlife, plants, symbols and tools, and thousands of inscriptions in ancient scripts such as Musnad, Thamudic, Nabataean and early Arabic.

Once a vital source of fresh water in the vast desert of Najran, wells in the area date back more than 3,000 years and contain fresh water to this day.