A travel guide to AlUla

A destination that’s become synonymous with the kingdom’s bucket-list sights, prepare to be stunned by the sights and sounds of this unspoiled natural beauty… 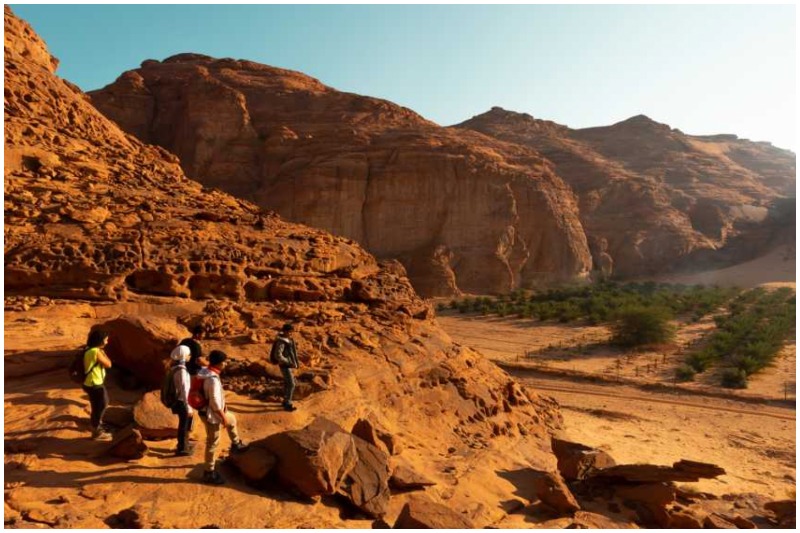 AlUla’s significance as a crossroads of ancient civilisations dates back thousands of years. While it’s largely remained off-limits to the public, that changed in 2020 when AlUla opened some of its sights to visitors for the first time. Since then, the historic town of AlUla, located 1,040 kilometres northwest of Riyadh, has been transforming into an incredible open-air museum – building on its storied past to carve a future filled with resorts and glamping retreats carved into the desert landscape, restaurant pop-ups aplenty and festivals that celebrate the rich history, art and culture of the region.

Here’s the What’s On travel guide to AlUla. 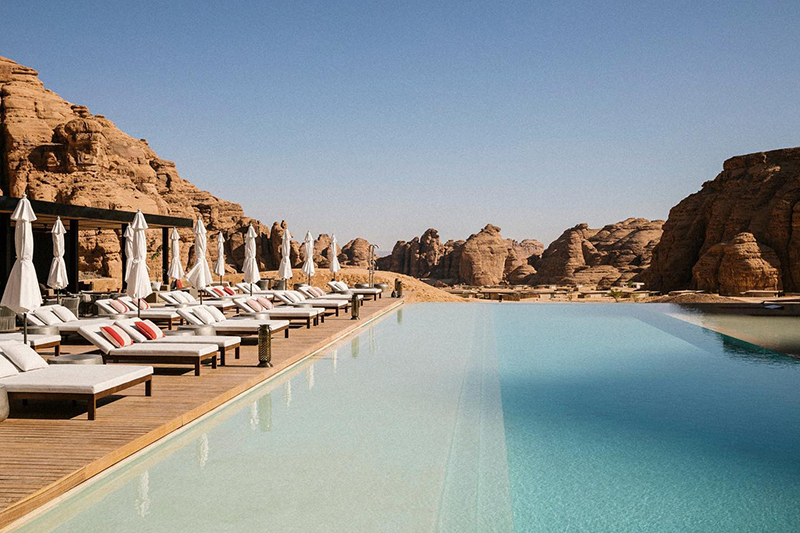 For only its third property in the world, boutique eco-retreat Habitas made roots in the Ashar Valley of AlUla. Complete with 96 villas dotted across the vast desert landscape, rooms are set between manmade dunes for optimum privacy, and many feature epic mountain views from their private terraces. The best way to get around is on an electric bike, and there’s something truly freeing about whizzing through the valley that way (although there’s buggies too for those looking to give their legs a rest). The main restaurant Tama, which means ‘here and now’, is designed as a space for bringing guests together, with big lounge spaces and lots of long tables for dining in big groups. On the menu, nourishing dishes are globally influenced with a strong Middle Eastern presence, and ingredients sourced from local farms take centre stage. There’s a separate, open-air seating space, which leads out to a shimmering infinity pool: it’s the perfect spot to dip between the water and the relaxing ambience of the lounge. Habitas started as a community-focused series of events, so it makes sense that there’s plenty of other gathering spaces too, including the glass-lined reception, Moon Shell coffee lounge, and an open-air space for breathing workshops and meditation. Installations originally commissioned for the first Desert X AlUla are also shaped into the resort offering, allowing guests to ignite their inner child with a giant swing set backdropped by huge rock formations and trampolines hidden in the desert sands. 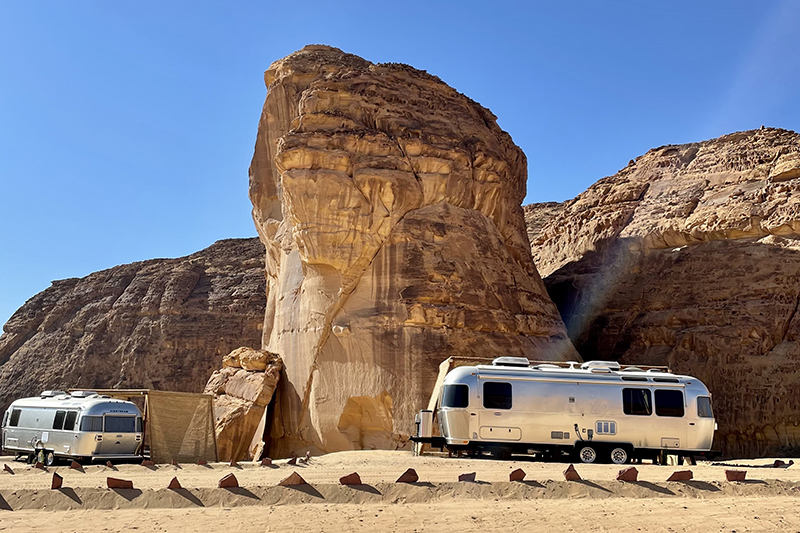 Looking to really connect with the otherworldly AlUla landscape? Habitas has added a new string to its bow in the kingdom, which promises a glamping experience – but not as you know it. Caravan by Habitas is located a five-minute drive from the Habitas resort, so glampers checking-in benefit from all of the perks of the resort including Tama restaurant, access to the infinity pool and fitness and wellness spaces. Rather than Bedouin-inspired tents, accommodation here is in the form of retro Airstream trailers tucked into the AlUla valley. Each is fitted with cosy twin or neat double beds and has its own kitchenette, dining space and separate shower and toilet, making it a comfortable and well equipped base to serve as your AlUla starting point. It’s been given the Habitas treatment with a day bed fitted under a shaded terrace and soft furnishings in aztec prints scattered throughout. There’s separate facilities for Caravan by Habitas guests too, including the new Gathering Tent, where guests can connect over games under the shaded tent, an open-air cinema beaming films onto a rock face, and a duo of vintage food trucks where guests gather for fresh croissants at breakfast or pizzas in the afternoon. 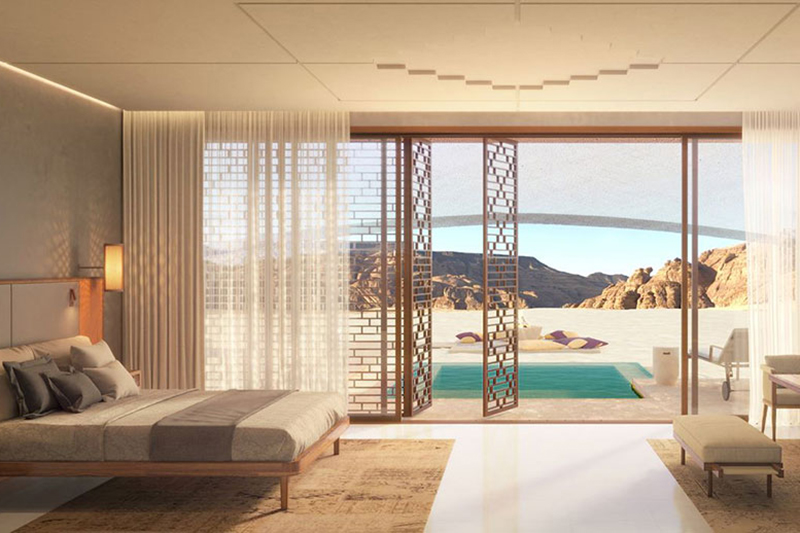 In 2022, AlUla’s hotel development continues with the introduction of Banyan Tree AlUla in the second half of the year, which will rebrand and extend the current Ashar Resort, close to the UNESCO-listed site of Hegra. Inspired by more than 200,000 years of human heritage, the resort features a collection of one-, two-, and three-bedroom pool villas, each blending an elegant look and feel with the natural elements.

On the rustic outskirts of AlJadidah, a serene oasis surrounds Circolo, an Italian restaurant that serves as the perfect spot for a long, lazy lunch. Twirling ribbons of al dente linguine are served in a sauce of wild mushrooms and truffle oil, or order one of the artisan pizzas, with a perfectly crisp base and topped with flavours such as pesto burrata; eggplant, caramelised onion and bacon; or pulled lamb.

Bringing the sandy beaches of Greece to an AlUla mountain top by way of Riyadh, Okto brings contemporary Greek cuisine to one of the best vantage spots in AlUla: Harrat Viewing Point. The restaurant – painted all-black – blends into the moody slate colours of the mountain peaks, and guests gather around tables that dot a central bar, with woolly ponchos on hand to keep guests warm when the temperature dips. On the menu, slithers of deep-fried halloumi, lamb chops marinated with kalamata olives and crispy chicken gyro’s are among our favourite dishes. 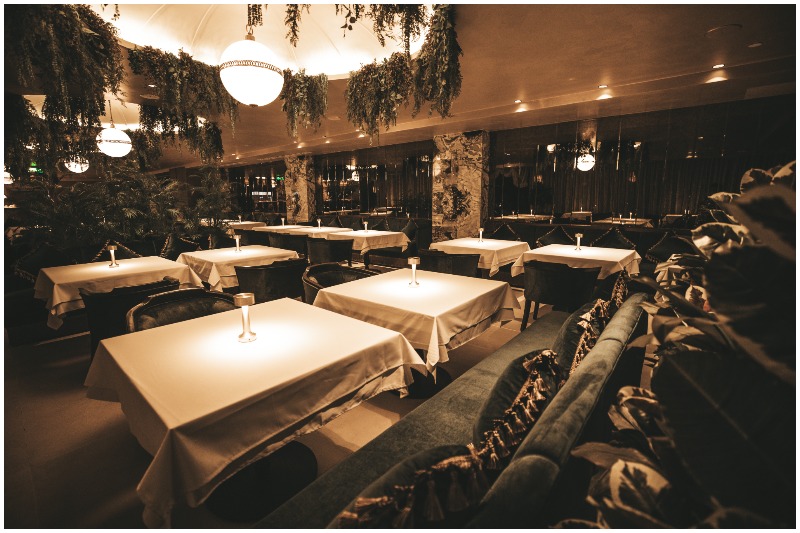 The vast AlUla desert might not be a predictable choice for a Michelin-pedigree chef, but that’s where you’ll find Jason Atherton’s Maraya Social. A European brasserie housed on the rooftop of the mezmerising Maraya Hall, Maraya Social is the British chef’s first restaurant in Saudi Arabia. Inside, the leafy green restaurant is beautifully botanical, while outside, a terrace lit with flickering candles and the rocky façade creating a dramatic backdrop.

Looking to tick “eat like a local” off your AlUla bucket list? In the heart of AlUla Old Town, make a pit-stop at Merkaz, a casual café serving traditional Arabian dishes in a setting peppered with outdoor pergolas, palm trees and fairy lights. Settle into one of the plush sofas and don’t leave without a piping hot pot of karak. 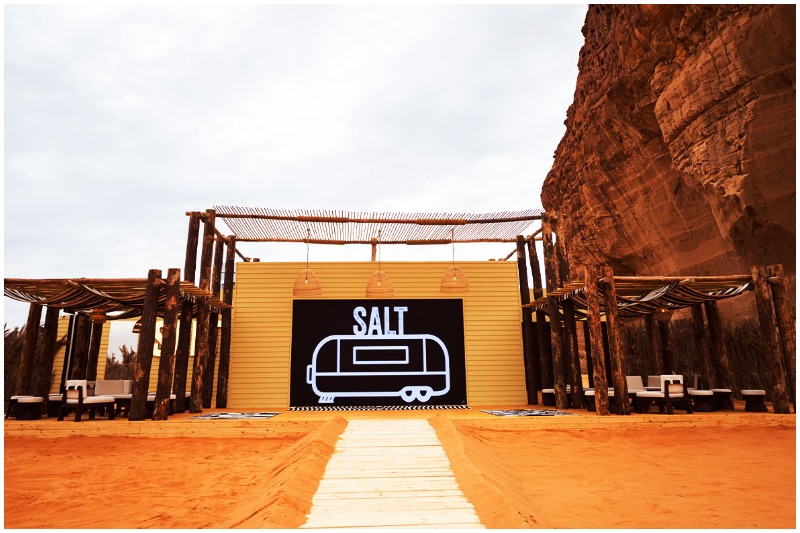 Pay a visit to AlJadidah, where old meets new 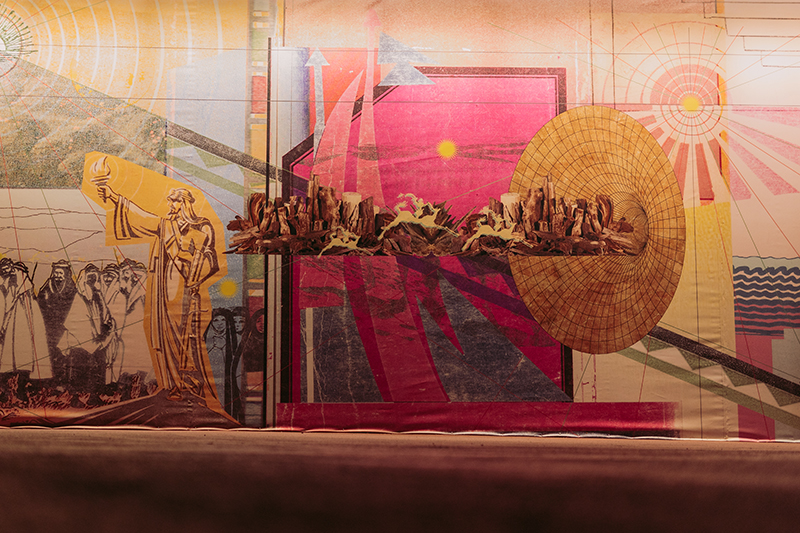 The latest addition to AlUla’s growing number of attractions is AlJadidah, which has been transformed into a pedestrianised hub for art, culture and dining. It’s easy to walk around the entire of AlJadidah, which means ‘new town’ in Arabic, which has been cleverly divided around five separate squares. Overlooking AlUla Old Town, highlights include Oasis Square, where live musicians entertain those that gather under the dappled shade of chairs and benches set under palm trees; Moayadah Square, with its array of street food vendors and food trucks; and Art Square, home to Cinema Al Housh, AlUla’s first arthouse cinema, showing an array of English and Arabic independents.

Check out the dazzling Maraya Hall 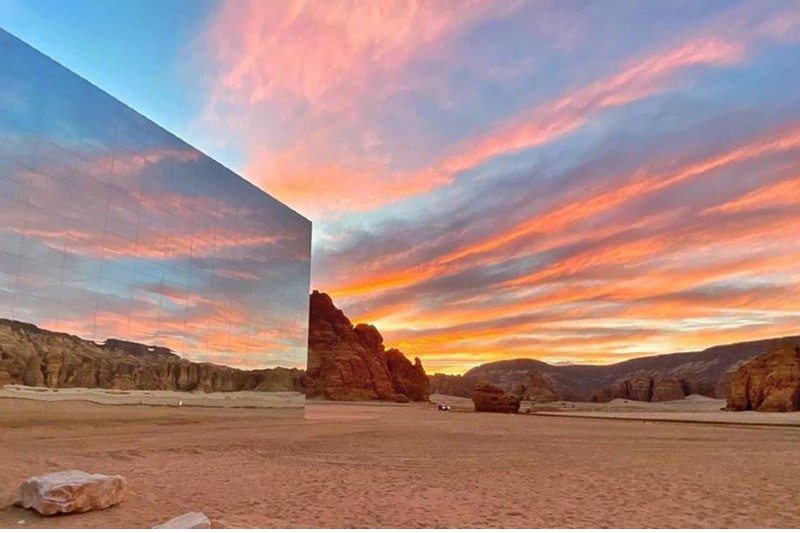 A Guinness World Record-breaking venue, AlUla’s Maraya Hall is an architectural feat, and officially recognised as the world’s largest mirror clad building. The 500-seater concert hall has already played host to stars including Enrique Iglesias, Alicia Keys, Lionel Richie and Andrea Bocelli, and those who visit AlUla during the winter season (October to March) can expect a similar calibre of star to be performing most weekends. Feeling hungry? Jason Atherton’s Maraya Social is housed on the rooftop. Looking for some more culture? Until March 20, step inside the private art collection of Saudi-based collector and patron Basma AlSulaiman in a curated exhibit at Maraya.

Immerse yourself in an open-air exhibition 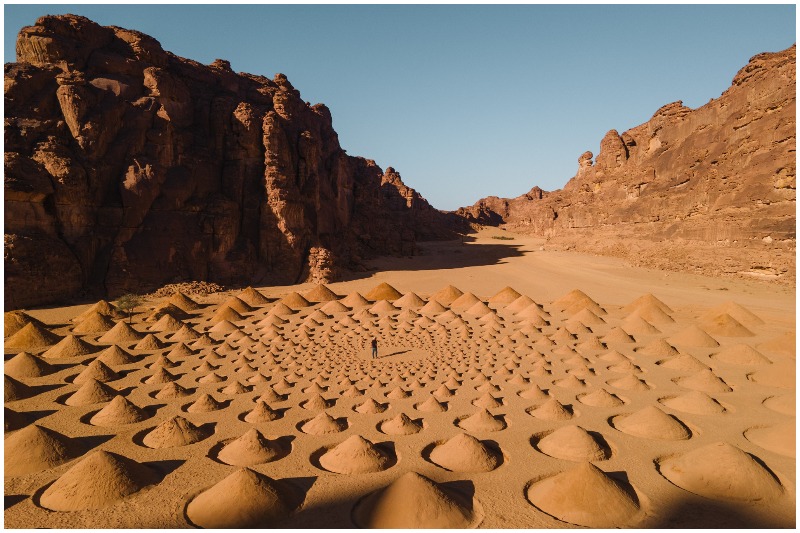 A collaboration between the Royal Commission for AlUla (RCU) and California-born Desert X, Desert X AlUla is the living art exhibition you need to see in 2022. Running until March 30 and free to enter, this year’s theme is Sarab, which means “mirage” in Arabic. Laced through a series of spectacular canyons in Al-Mutadil valley, 15 regional and international artists have curated pieces for Desert X AlUla, each inspired by “mirage” and “oasis” and their eternal links to the desert landscape. Don’t miss Alicja Kwade’s photo-friendly series of frames and mirrors that reflect and frame the natural artefacts on the desert floor, and the subjects that face them. 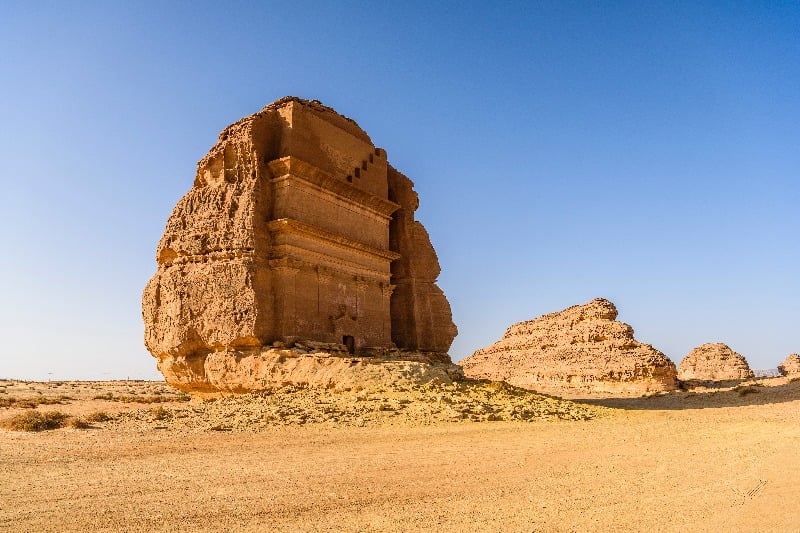 Hegra was the first site in Saudi Arabia to be inscribed onto the UNESCO World Heritage List in 2008 (a further five have since been added). There’s a collection of 110 tombs to discover, that date back some 2,500 years. Some tombs are better preserved than others, but decoration and inscriptions are all discoverable with the naked eye. The best way to maximise your trip is with a local Rawi as your guide in a vintage Land Rover, which stops at five key sights over a two-hour tour including the most famous Tomb of Lihyan Son of Kuza and Hegra’s highest point, Jabal Ithlib. 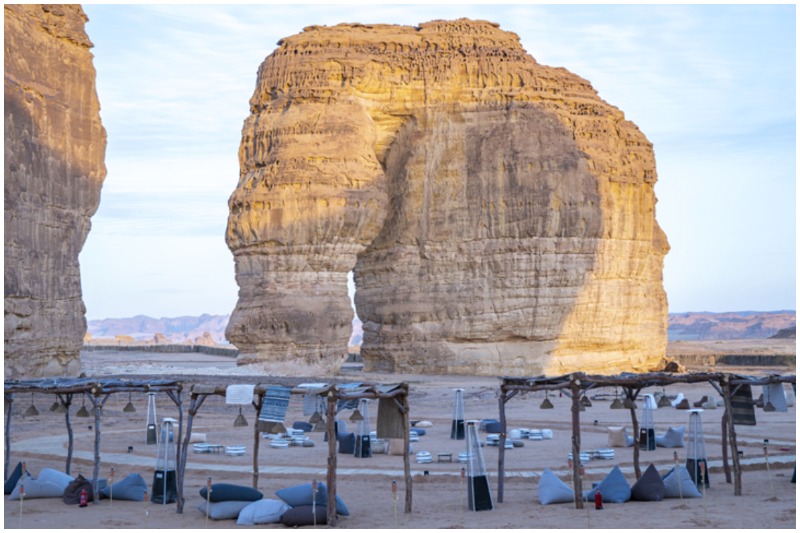 There are a whole host of sunset spots across AlUla – this is a town that looks good from every angle, but Jabal AlFil – commonly known as Elephant Rock – is one of the best places in AlUla to watch the day turn to night. In front of the looming Jabal AlFil, given its moniker thanks to its size and shape, is an array of sunken seating carved into the sand, plus bea bags and benches, giving visitors a front row seat to watch the sun dip behind the famous geological formation. It’s free to enter, and there’s now even a SALT food truck located within the grounds, alongside a coffee shop.

Culture
Short Haul
Travel
Travel Guides
EDITOR’S PICKS
10 things to look forward to in Saudi Arabia this January
READ MORE
8 incredible hotels opening in Saudi Arabia in 2023
READ MORE
Epic Andy Warhol exhibition coming to AlUla Arts Festival 2023
READ MORE
5 fun and completely free things to do in Riyadh
READ MORE
MOST POPULAR
Jake Paul vs Tommy Fury is set for February 26 in Riyadh
Tabuk is getting a mega new entertainment destination
A complete guide to Boulevard World Riyadh
10 wonderful things to do in Riyadh this weekend: January 26 to 28
Andrea Bocelli returns to AlUla: Here's how to watch
YOU SHOULD CHECK OUT