A completely spoiler free review of the new Elvis movie

Culture
Film
Things to do

The return of the King…

“I’m not really an Elvis fan” my wife said as we walked into Dubai Opera ahead of the gala screening of this new, Baz Luhrmann directed biopic. And I suspect that will probably be the case for many people heading to the cinema to see this film over the coming months, not least because he died before a lot of you box office regulars were born (1977).

But you rarely go to the cinema for the explicit love of a subject matter, it’s more often the yarn of intrigue that’s spun around it that pulls you to the screen. And the rhinestone-studded yarn of Elvis, out in cinemas across the KSA from Friday June 24, looks like it might lead all the way to next year’s Academy Awards.

It’s a film that occupies a contradicting space, it is both Baz Luhrmann at peak Baz Luhrmann and like nothing he has ever done before. The love and celebration of music is given top billing, we’re rushed through neon flamboyance, blinding lights and dazzling costumes — but those trademark Baz Shakespearean comedic asides are almost completely absent and at times, particularly the big show performances, it feels like we’re watching documentary footage. 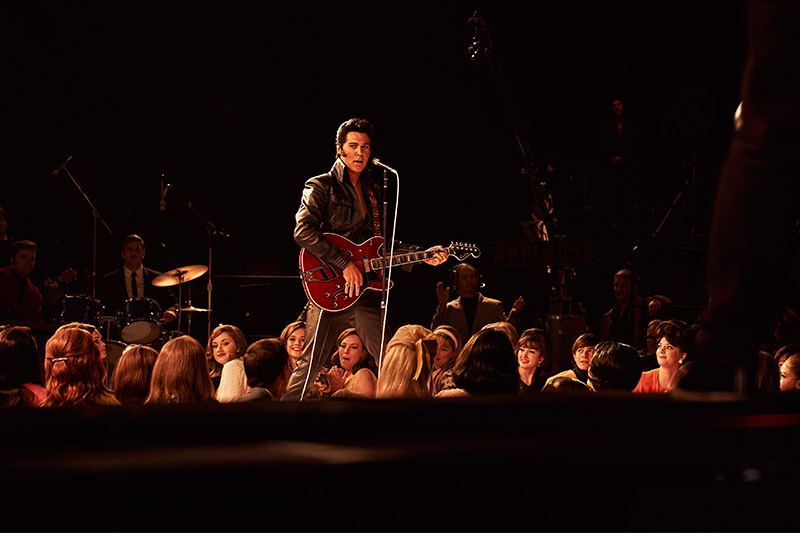 Caught in a trap

The tale begins with brief flashbacks to Elvis’ youth, growing up as part of a white working-class family in a predominantly African American district of Memphis, Tennessee. We see him fall in love with the culture of that neighbourhood — the music, the gospel services, the fashion and the people.

As the record skips along, the audience is left in no doubt that these particular experiential grooves are amongst the most powerfully formative in the story of Elvis.

Whilst working as a truck driver, Elvis records a track with Sun Studio, ‘That’s Alright‘ — which brings him to the attention of ‘Colonel’ Tom Parker (played by Tom Hanks), a cantankerous carnival promoter with an eye for talent that can captivate audiences. He sees in Elvis, a golden pelvis-gyrating goose, a sultry thirst trap for a generation of teenagers that for the first time in history have purchasing power, and so promises the young star a life of fame and fortune if he takes him on as manager.

And it’s no spoiler to reveal that he delivers on this accord, Elvis, we’re told in the film’s textual epilogue, remains the best-selling solo artist of all time. But the means and methods that Colonel Tom employs to get him there, cast him as somewhat of a ‘Devil in Disguise’. Small narrative-driving interludes are actually narrated by Parker, as his own death grows near, and amount to fevered pleas of innocence, that the rest of the film relishes in unravelling.

You can’t walk out

Whilst the relationship between Elvis and the Colonel, as well as the trajectories, decisions and conflict that arise from it are a central part of the film, they’re not the only staging ground for expertly crafted drama. We’re given front-row seats to see Elvis rocked by landmark events such as the assassinations of Bobby Kennedy and Martin Luther King Jr., he’s rolled over by the passing of his mother, and draws inspiration from contemporary legends, most notably B.B. King (Kelvin Harrison Jr.).

We’re shown the vacuum of space that surrounded the first truly global megastar, what happens when that star’s fire begins to wane, and the astral collapse kick-started by the stage lights going dark.

But beyond that, there are ever-present reminders that the Elvis story unfolds against a backdrop of, and in response to, a tumultuous time in American history. Indeed, “you cannot tell the Elvis Presley story without talking about race” Baz Luhrmann told us in an interview ahead of the film’s release “no issue of race in America, no Elvis”.

Because I love you too much baby…

From childhood to death, the record skips through a condensed track collection of many major chapters in Elvis’ life, and excluding the earliest years where the role is performed by Chaydon Jay, our guide is Austin Butler.

Though the resemblance is casual, Butler’s performance, his inhabiting of the King of Rock and Roll, represents nothing less than iconic possession. This is no ‘Stars in their Eyes‘ impersonation, tonight Matthew — Austin actually IS Elvis. And this bond, between study and student, that has been created through the intense character research, the achievement of synergising the charisma, the voice, the fire and the intangible pheromonal screen magnetism — is the sort that will surely stay with him, in some residual form, for the rest of his days.

Those orbiting the star, don’t do so in shadow — Olivia De Jong’s Priscilla Presley is faultless and radiant, Hanks as the twinkly-eyed Colonel is deliciously contemptuous and still somehow relatably human. Perhaps it is the character development, where Luhrmann is letting his Shakespeare out.

Verdict: This is a movie only Baz could make great. It starts in a carnival, the protagonists’ life is a circus, and when the credits roll — you’re left with the unshakeable sensation, you’ve just witnessed one Vegas-level show. Viva Baz Luhrmann.

Elvis is out in cinemas across the KSA now.

Culture
Film
Things to do
EDITOR’S PICKS
10 things to look forward to in Saudi Arabia this January
READ MORE
8 incredible hotels opening in Saudi Arabia in 2023
READ MORE
Epic Andy Warhol exhibition coming to AlUla Arts Festival 2023
READ MORE
5 fun and completely free things to do in Riyadh
READ MORE
MOST POPULAR
Jake Paul vs Tommy Fury is set for February 26 in Riyadh
Tabuk is getting a mega new entertainment destination
A complete guide to Boulevard World Riyadh
10 wonderful things to do in Riyadh this weekend: January 26 to 28
Andrea Bocelli returns to AlUla: Here's how to watch
YOU SHOULD CHECK OUT