American rapper Russ to perform at Rage on the Red Sea

The build-up to the Rage on the Red Sea event in Jeddah has moved up a gear with the announcement of a live performance by a famed American rapper.

Russell James Vitale, publicly known as Russ, is all set to return to Saudi Arabia – taking to the stage at the World Heavyweight Championship fight between Anthony Joshua and Oleksandr Usyk – on August 20 as part of his world tour, “The Journey Is Everything”. 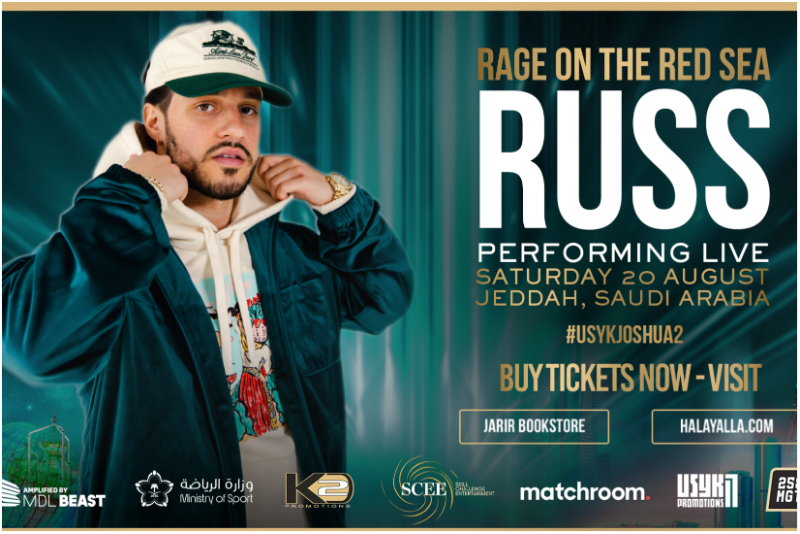 Russ will entertain the crowd shortly before the most highly anticipated fight of the year. This will be the Atlanta-based rapper’s second visit to the country, and he is expected to play some of his chart-topping hits like “Losing Control”, “What They Want”, “Ain’t Nobody Takin My Baby”, and “Missin You Crazy”.

Since 2010, Russ has grown a loyal fanbase across the world, but his mainstream breakthrough came in 2017 with the platinum-certified top ten album, ‘There’s Really a Wolf’, before cracking the top five of the Billboard 200 with 2018’s ‘Zoo’ and 2020’s ‘Shake the Snow Globe’. He also released the companion albums’ Chomp’ and ‘Chomp 2’.

In March 2022, the multi-platinum recording artist went viral on TikTok for a remix of his song “Handsomer” featuring Ktlyn Raps. It broke through the top 40 on Billboard’s Hot 100 chart on March 29, his fourth song on the list. And most recently, Russ has collaborated with Ed Sheeran for his new single “Are you Entertained”.

The 28-year-old rapper, singer, and songwriter first performed in Saudi Arabia back in 2019 in Riyadh.

For fans who cannot catch him in Jeddah next week, Russ also leads the bill on August 18 in Riyadh at the Gamers8 festival, alongside DJ Alan Walker and Egypt electronic act Disco Masr.

Concerts in Saudi Arabia are organised by MDLBeast through the company’s arm, which aims to amplify the regional music scene through concerts, events and experiences, MDLBeast Presents.