Already headlined by undisputed WWE universal champion Roman Reigns and YouTuber-turned-wrestler Logan Paul, the show is bound to attract the attention of both fans and interest mainstream onlookers. The duo had a heated exchange on social media after Reigns appeared on Paul’s podcast, leading to the match being signed.

So, what else should fans expect from the show this Saturday November 5?

Currently, seven matches are on the card for WWE Crown Jewel 2022. There will be some mammoth grudge matches and history-making moments waiting to happen, including Drew McIntyre vs Karrion Kross in a Steel Cage and Bianca Belair vs Bayley in a historic Last Woman Standing match.

It has also been announced on Riyadh Season’s Instagram page that Bray Wyatt will be making an appearance in the event’s special segment. It could mean that the identity behind Uncle Howdy or the ‘Wyatt 6’ will be revealed, which has been building ever since Bray made his return at Extreme Rules.

One thing’s for sure – WWE Crown Jewel has much hype surrounding it due to the matches the show is set to offer. The card is stacked with top stars fighting in high-stakes matchups. Given the possibility of more being added, it looks like it will be one stellar must-watch event.

Here’s all you need to know about WWE Crown Jewel 2022.

The headline match will see Reigns stand as the Undisputed WWE Universal Champion against the divisive Logan Paul in the evening’s main event. The recent 10th anniversary of Reigns’ time in the WWE ring will bring an extra edge to the challenge as the champion looks to maintain his hold over the sport even with new challenges emerging from all sides. 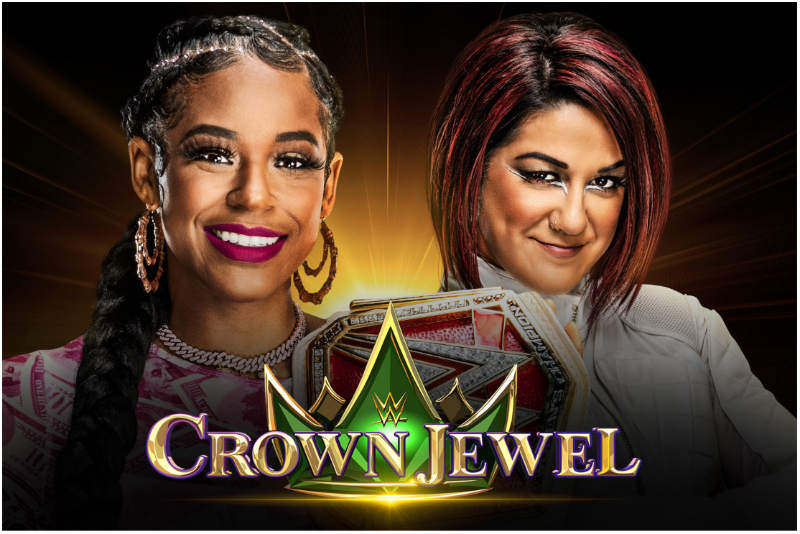 In recent months, the returning Bayley has worked her way back up to earn her shot at a championship match, with Crown Jewel presenting the ideal scenario for the Last Woman Standing contest title bout against WWE Raw Women’s Champion Bianca Belair. 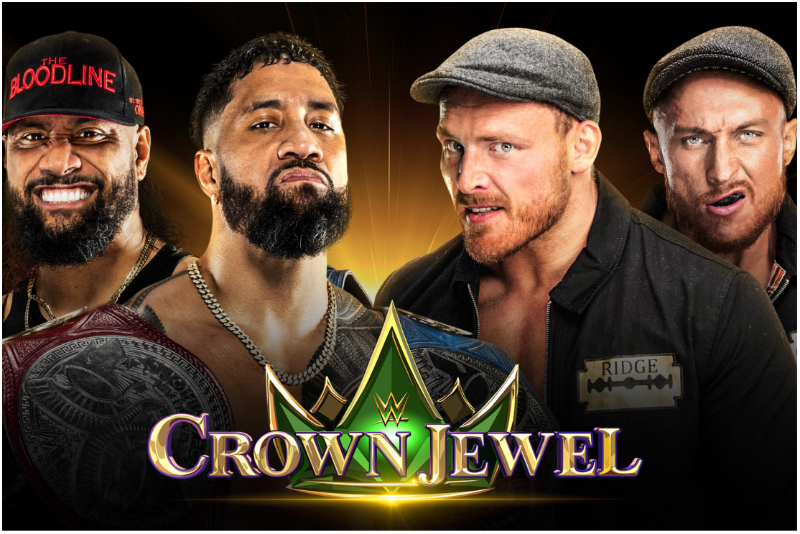 The late addition to the impressive match card features a title challenge as the Undisputed Tag Team Champions, The Usos, will face off with The Brawling Brutes in a testy contest. The resurgent Brutes will aim to capture the title belts after their close misses in recent times, while The Usos looks to maintain the dominance of The Bloodline, headed by Roman Reigns, over the WWE universe. 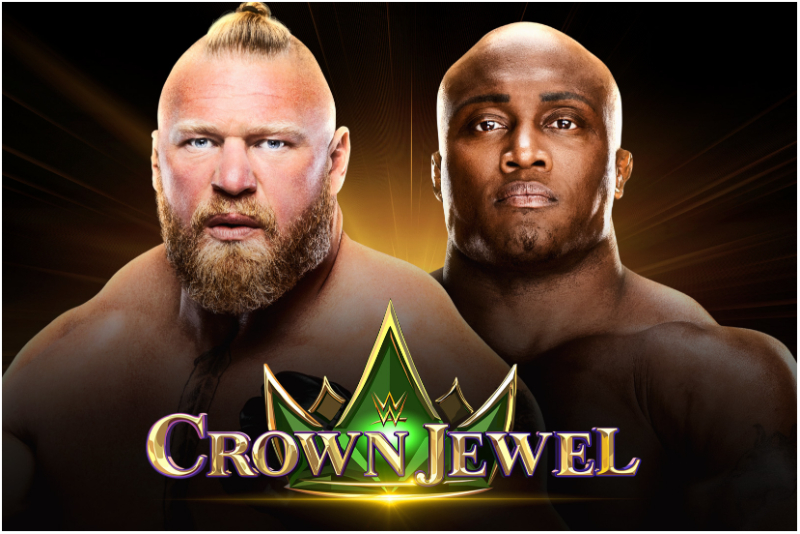 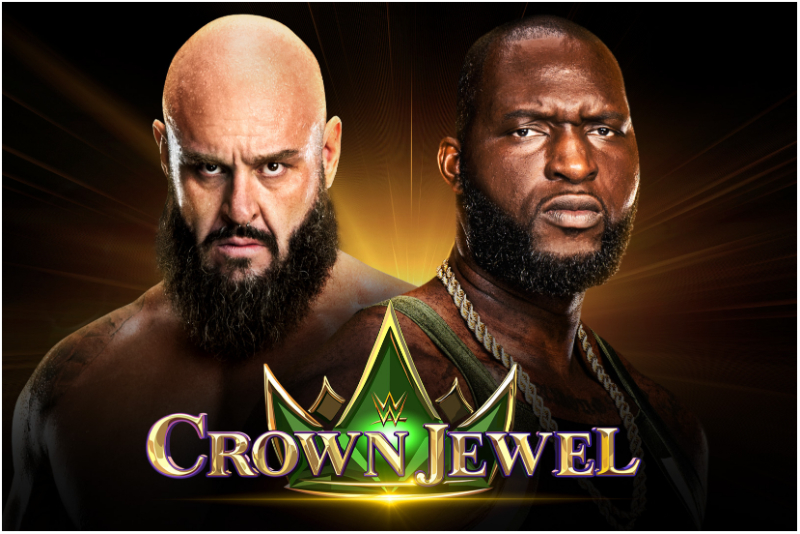 Later in the evening, a true clash of the titans will see Braun Strowman go toe-to-toe with the imposing Omos at WWE Crown Jewel. The singles match between two of the most powerful wrestlers across the WWE roster is expected to bring an explosive match when the bell rings in Mrsool Park.

The O.C. vs The Judgment Day

Meanwhile, the recently reformed tag team trio The O.C. will go to war with The Judgement Day as AJ Styles, Luke Gallows, and Karl Anderson band together to take on Finn Bálor, Damian Priest, and Dominik Mysterio in a Six-Man Tag Team Match. 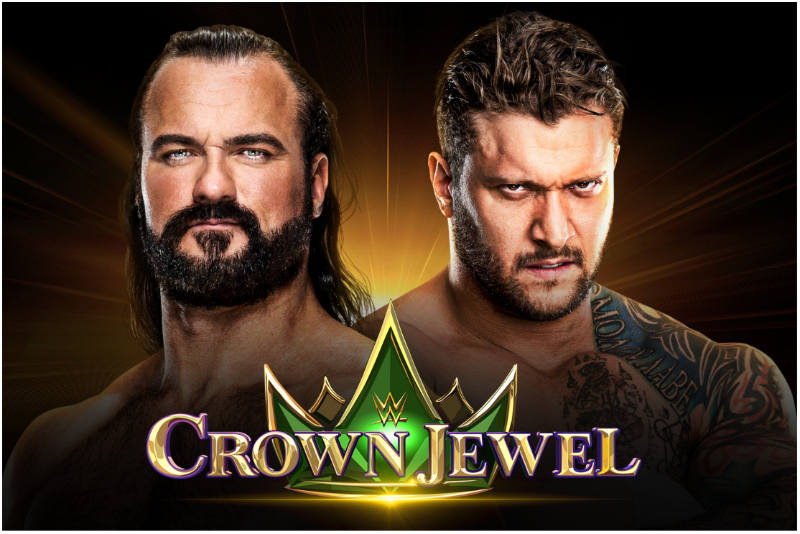 Also on the incredible match card, Drew McIntyre will take on Karrion Kross in a brutal steel cage match. Following Kross’ intervention during his Undisputed WWE Universal Title Match against Roman Reigns at WWE Clash at the Castle, McIntyre is ready to put an end to the endless slew of sneak attacks from Kross.

Tickets for WWE Crown Jewel 2022, taking place on Saturday November 5 at 6.30pm at Mrsool Park, are currently on sale. The doors will open at 4.30pm, and for the best experience, visitors are recommended to come earlier to enjoy the WWE Village.

For those looking to catch all the action online, fans in the region can tune in to watch the show live and exclusively on Shahid.

Events
Sport & Fitness
EDITOR’S PICKS
10 things to look forward to in Saudi Arabia this December
READ MORE
Instagrammable café EL&N opens its newest branch in Riyadh Front
READ MORE
Saudi Arabia's first-ever JW Marriott hotel opens in Riyadh
READ MORE
Epic Andy Warhol exhibition coming to AlUla Arts Festival 2023
READ MORE
MOST POPULAR
Pack your bags for a beach getaway at Th8 Palm in Dubai
8 wonderful things to do in Riyadh this weekend: December 8 to 10
Balad Beast is coming to Jeddah this weekend: here's all you need to know
These 3 Red Sea resorts will open in May 2023
6 incredible things to do in Jeddah this weekend: December 8 to 10
YOU SHOULD CHECK OUT