Culture
Things to do

It’s one of the most visited mosques in the city…

Known as Al Rahma or Fatima Al Zahra Mosque, Jeddah’s floating mosque was built in 1985 and is an architectural marvel that brings together traditional Islamic art with modern design and technology.

You’ll find it at the waterfront, which is one of the reasons it’s one of the most visited mosques in the city by religious pilgrims and tourists.

The mosque stands on white stilts suspended in the water and has a walkway linking it to the shore. Be sure to visit at high tide when the mosque looks like it’s floating on water. 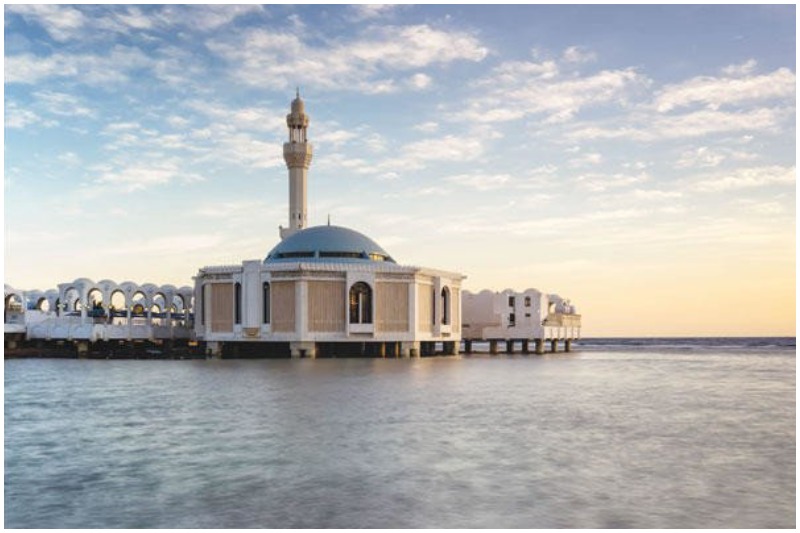 Here are three reasons why you should check out Jeddah’s floating mosque.

1. The interior is just as beautiful as the view from outside

The white marbled mosque and its minaret stand out from far away against the backdrop of the glistening sea. There is also a spacious courtyard, and the low-walled walkway is a relaxing place to stand by and take in the Red Sea.

But don’t just admire it from the outside; the interiors are just as beautiful.

The ground level offers visitors and worshippers a breathtaking panoramic view of the waters, and the upper level is bathed in golden light coming through the mosque’s stained-glass roof.

It’s also an opportunity to see Islamic art from different time periods adorns the interiors of the walls. The mosque today also uses state-of-the-art technology for its sound and light making it a perfect example of contemporary and traditional Islamic design coming together.

2. It’s an opportunity to be peaceful and quiet

The mosque is open 24 hours a day, and tourists are welcome, but it is a lot busier during the five daily prayer times.

Visitors are requested to respect the sanctity of the mosque, not speak too loudly or play music, and dress modestly at all times.

The mosque is ideally located at Jeddah’s waterfront. Even though it’s a little further away from the tourist areas, you will find plenty of cafes and restaurants nearby to unwind in after the visit. There are also lots of great viewing spots to admire the sea from.