10 fun facts about the world's most valuable horse race, The Saudi Cup

Now recognised as the world’s most valuable horse race, the third edition of the Saudi Cup will take place over a two-day event on February 25 and 26…

In the world of horse racing, The Saudi Cup is one of the most significant calendar events. For 2022, the two-day international event will return to the King Abdulaziz Racecourse on February 25 and 26, with some of the world’s leading racehorses and jockeys in attendance. Here’s 10 fun facts you need to know.

1. It may only be three years old, but it’s now recognised as the world’s most valuable horse race

The winnings for The Saudi Cup alone are $20m, while prize money across the two-day meeting totals $35.1m, making it the most valuable fixture in the horse racing calendar.

2. The event is held at King Abdulaziz Racetrack in Riyadh, which was opened in 2003

Across the two-day meeting on February 25 and 26, there is also the International Jockeys Challenge (IJC), five highly regarded Group 3 races on both dirt and turf, the Group 2 Obaiya Arabian Classic for Purebred Arabian racehorses and the Jockey Club Handicap for locally-trained horses.

3. The highlight of the weekend, is The Saudi Cup, a global Group 1 flat race held over 1800m

It was won in 2021 by HRH Prince Abdul Rahman Al Faisal’s global superstar, Mishriff, now one of the most famous horses in the world.

4. The first ever Saudi Cup meeting in 2020 featured 22 Group or Grade 1 winners

Between them, they had accumulated 34 wins at that level.

5. Horses have been entered for the 2022 Saudi Cup meeting from 22 countries across the world

These include horses from the UAE, France, Oman, Uruguay, Japan, UK and the USA, amongst others.

6. Laura Green was the first woman to ride at the track

The British jockey made history when riding Tacitus in his preparation work for the 2020 Saudi Cup.

7. The International Jockeys Challenge (IJC) is the first of its kind to pitch equal numbers of female and male jockeys together

Taking place on Friday February 25, seven male and seven female jockeys fight it out on locally-trained horses over a series of four races. The 14 international jockeys compete as individuals for a prize purse of $100,000, while the local horse connections stand to win a share of the $400,000 prize money at stake for each of the four contests.

8. Horse racing has often been considered a male dominated arena, but this event looks to change that

The horse is widely known among Saudis as being the Horse that King Abdulaziz rode during his battles to unify the Najd region, the heart of the Kingdom of Saudi Arabia, and then establish the kingdom as we know it today. There is a race named the Obaiya Arabian Classic, worth $2m, on the Saturday of The Saudi Cup weekend.

10. The Saudi Cup trophy was designed by House of Garrard 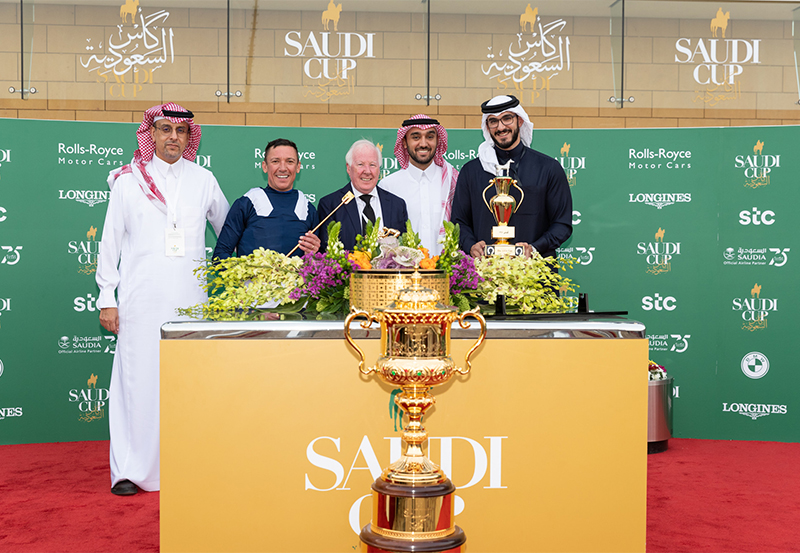 Sport & Fitness
Things to do
EDITOR’S PICKS
New eVisa scheme for tourists arriving into Saudi Arabia
READ MORE
AlUla Wellness Festival is returning: here's all you need to know
READ MORE
10 of the best mocktails in Riyadh you need to try right now
READ MORE
The most romantic restaurants in Jeddah
READ MORE
MOST POPULAR
What to expect when Bujairi Terrace officially opens on December 4
Raise a pinkie and toast with friends at A.O.K. Kitchen’s first-ever afternoon tea
6 amazing things to do in Jeddah this weekend: December 1 to 3
MDLBeast Soundstorm 2022 line-up: Saturday, December 3
MDLBeast Soundstorm 2022 line-up: Friday, December 2
YOU SHOULD CHECK OUT