10 things to look forward to in Saudi Arabia this January

There’s much to cheer about for the new year, with a plethora of exciting events taking place across the Kingdom. Whether you’re a fan of musicals, local DJs, sporting events, or just exploring new things to do, we’ve got you covered.

Read on for 10 unmissable events happening in Saudi Arabia in January 2023.

Until January 15: An epic rally-raid adventure over the Saudi Arabian sand dunes

The wheels are back in the sand, finally. The 2023 Dakar comprises 14 special stages and a prologue, covering a distance of over 8,500 kilometres (5,281 miles), including liaison. The crews will spend two days at Sea Camp on the shores of the Red Sea. A prologue tomorrow (Saturday December 31) will set the road order for the first proper stage on New Year’s Day, a loop around Sea Camp. From there, the bivouac sets off on the rest of the 15-day adventure, running first up to AlUla for stage two before continuing onto Ha’il, where a pair of loop stages will be run for stages four and five.

From Ha’il, the Dakar starts to wind itself south towards Al Duwadimi before finishing the first half of the rally in Riyadh. The rest day will take place on Monday January 9, before recommencing with a 439 kilometres (272.78 miles) test to Haradh as the itinerary takes on a new format for the second week. Next, competitors will discover the coast of the Arabian Gulf after a four-day adventure through the Empty Quarter, including the marathon stages. No mechanical assistance will be permitted for competitors during these stages, meaning crews are left to fight their own causes should anything untoward occur. For those who survive, the penultimate test takes the crews from Shaybah to Al-Hofuf before a final, relatively straightforward stage ending with the ceremonial finish in Dammam on Sunday January 15. It’s the longest Dakar since 2014, but who will come out on top?

January 11 to 15: The Spanish Super Cup kicks off in Riyadh

Saudi Arabia is to host the Spanish Super Cup for the third time consecutively as part of the Diriyah Season’s celebrations. Set to run at the King Fahd Stadium, the tournament will be played in the knockout system. Spanish league champions Real Madrid will play Valencia, while Spanish Cup champions Real Betis will take on rivals Barcelona, with the winners of each game competing for the Spanish Super Cup.

January 11 to 28: DreamWorks’ Shrek the Musical brings all your favourite characters to life on stage

Make room for ogre-sized family fun as the greatest fairy tale never told comes to life in a whole new way in this breathtaking musical. Premiering for the first time in Saudi Arabia at Ithra, Shrek The Musical features a terrific score of 19 songs, big laughs, great dancing and fantastic scenery.

January 12 to 23: An annual festival celebrating all things design

The Saudi Design Festival (SDF) returns. Presented by the Architecture and Design Commission and organised by the creative cultural consultancy &bouqu, this year’s edition will be the biggest yet, unveiling a new vision and format for the festival, with a range of events and activations that celebrate local and international design. SDF 2023 commences with a Design Forum and opening weekend at the City Hub of the Mohammed bin Salman Nonprofit City in Riyadh from January 13 to 14. It will feature exhibitions, leading local and international experts who will discuss a range of topics on design, and workshops on important industry trends, such as sustainable design, creative entrepreneurship and the power of typography in graphic design and communication. Expect a comprehensive calendar of activities, transforming Riyadh into a creative hub with Design Destinations (Oud Square, The Boulevard, and Gallery Design), alongside activations in multiple venues across more than 40 locations in Riyadh.

January 13: It is time for the first rave event of the year in Jeddah

Buckle up. There’s no better way to kick off the New Year than with a hard-hitting rave event on the roof garden of an iconic building along Jeddah Corniche. Local headliners for the line-up include lover and curator of sound Danah Garii, all-around audiophile K.LED, and the duo of DJs and producers, Hats & Klaps – who are all pioneers who’ve helped shape Saudi Arabia’s evolving dance music scene. Plus, there are limited tickets available for those who’d like to check out the helipad of the building.

Sky Garden by Technopulse, Jan 13, 9pm to 2am (Door closes at 11.30pm), Roof Garden, The Headquarters Business Park, Corniche Road, Ash Shati, Jeddah 23511. Book your tickets here. The price starts from SAR400. For 21 years and above.

January 18: The return of the showpiece match between Italy’s league and cup winners

The activities of the Diriyah Season feature another global football event – the Italian Super Cup. The event will bring two giants of Italian football, AC Milan and Inter Milan, together at King Fahd International Stadium in Riyadh.

There is no introduction needed for this female K-Pop group. Blackpink is set to make their Saudi Arabia debut as part of their highly anticipated ‘Born Pink’ world tour. Members Jennie, Jisoo, Lisa and Rosé are ready to slay on Friday January 20 at Mrsool Park.

January 22: Rock out to Imagine Dragons

The multi-Platinum, Grammy Award-winning band is bringing their massive Mercury World Tour to Riyadh for one night only. Alongside their newer material, fans can expect to sing along to ‘Believer’, ‘Thunder’, ‘Young Dumb and Broke’, ‘On Top of the World’, and more from their catalogue of a decade-long career producing top rock anthems.

January 26 to 28: Polo returns bigger and better in AlUla 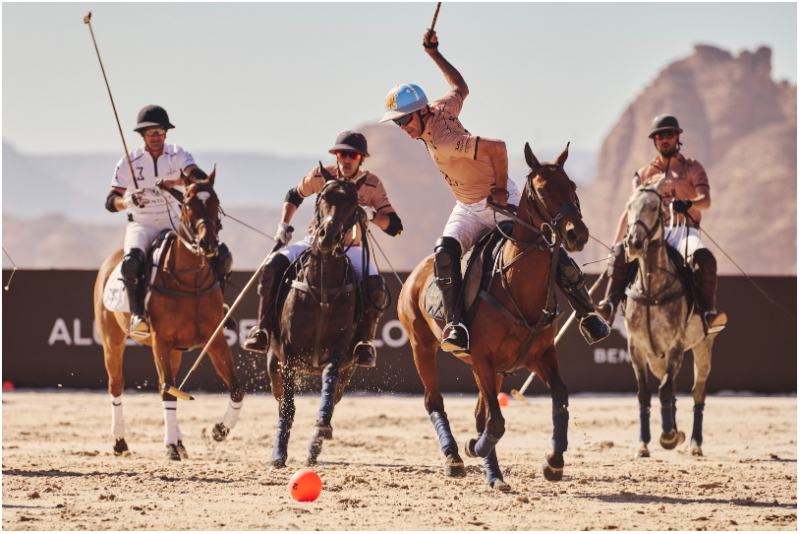 The sport of Kings is back. The Richard Mille AlUla Desert Polo, the world’s only modern polo tournament to be staged in a desert, returns to AlUla in partnership with Polo Club Saint-Tropez – Haras de Gassin. Fans will see the event grow, with eight teams now confirmed, led by some of the greatest players in polo history. Look forward to delectable food offerings and exclusive events running alongside the tournament. Tickets are now on sale for the third edition of the event, taking place across three days of world-class polo action.

Formula E returns to Riyadh for the latest instalment of the Diriyah E-Prix. This will be the fifth time that the event has been held – and the fourth time that the event features a double-header of races. The race is run in the dark with the illumination of LEDs lining the circuit, so expect sparks to fly when the drivers go wheel-to-wheel. Aside from the on-track actions, it will also feature various cultural festivities, food, retail experiences, and concerts for everyone to enjoy.

Art
Culture
Events
Sport & Fitness
Theatre
Things to do
EDITOR’S PICKS
10 things to look forward to in Saudi Arabia this January
READ MORE
8 incredible hotels opening in Saudi Arabia in 2023
READ MORE
Epic Andy Warhol exhibition coming to AlUla Arts Festival 2023
READ MORE
5 fun and completely free things to do in Riyadh
READ MORE
MOST POPULAR
Tabuk is getting a mega new entertainment destination
A complete guide to Boulevard World Riyadh
10 wonderful things to do in Riyadh this weekend: January 26 to 28
Andrea Bocelli returns to AlUla: Here's how to watch
What to expect as the Diriyah E-Prix races into town this weekend
YOU SHOULD CHECK OUT